Tagore’s work by Rituparno Ghosh may release in Hindi on May 20.. 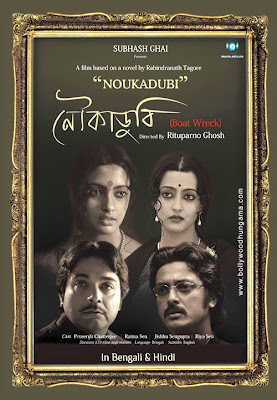 As the entire Bengali clan in and as well as other parts of the globe are celebrating Nobel Laureate Rabindranath Tagore’s 150th Birth Anniversary, Kolkata is celebrating it with an added fervour with a cinematic representation in the form of “Bidehir Khonje Rabindranath”, directed by ace filmmaker Sanghamitra Chaudhuri.
However, to miss the race was Rituparno Ghosh’s “Nauka Dubi” - an adaptation of Rabindranath Tagore’s famous novel about two couples; the wives getting swapped following an accident on the river that causes their boat to capsize. Rituparno has brought together the grand daughters of ’s matinee idol Suchitra Sen, Riya and Raima, alongside Prosenjit Chatterjee and Jisshu Sengupta.
The original Bengali version had a premiere at the International Film Festival of India (IFFI) in Goa late last year as the opening film of Indian Panorama section. Originally scheduled to be released on May 6th to coincide with Tagore’s 150th birth anniversary, the film will now be released on May 20th as May 3, 7 and 10 are polling days in and the producer director team had apprehensions of the film not working well during this time.
Produced by Subhash Ghai, this Tagore story is also being released in Hindi as Kashmakash for which Gulzar saab has done the lyrics in Hindi based on Tagore's verses set to the tunes of Rabindra Sangeet. However, very few might be aware of the fact that Bengali filmmaker Nitin Bose had made a Bilingual film way back in 1947 on this Tagore’ drama with Dilip Kumar playing the lead in the Hindi version and Abhi Bhattacharya in the Bengali.
Posted by Films & TV World at 11:07 AM