Music of “Will to Live” launched.. 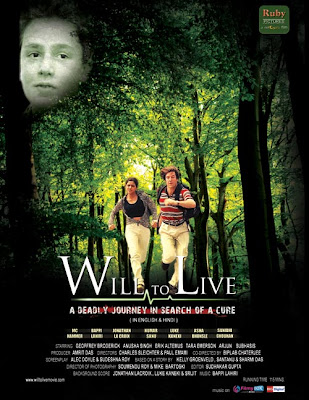 The music of Indo American venture “Will to Live” was launched recently in the presence of Producer Amrit Das, MD of music label “FilmyBox” Narendra Singh, Music Director Bhappi Lahiri, Asha Bhonsle, Sunidhi Chouhan, Sharon Prabhakar, Reema Lahiri  and Mahima Chaudhary.
An Indo-American production, shot exclusively in and dense jungles of , ‘Will to Live’ is a new genre film of cross cultural appeal. Inspired from a true story, it’s the fight of a courageous father for his son ailing from Lymphoma and how far a father can go to save his child’s life. Against all odds, this American father makes his adventurous journey into the jungles of in the quest of a rare herb that may cure his son’s Cancer. Battling the depths of the jungles, greed, power and corruption and risking his own life the story explores the intensity of father’s love. He has been given a ray of hope for his son.
Music being the soul of the Bollywood films, renowned Music Director Bappi Lahiri has been roped in this project who has created a perfect fusion of Western and Indian music. International singer MC Hammer has sung the title song of the film. Other singers to lend their voices are Asha Bhonsle, Sunidhi Chouhan, Kumar Sanu, Reema Lahiri  and Mamta Sharma. Sharon Prabhakar has also rendered a song after a long time. For the first time in , English and Hindi songs have blended together in one Album of ‘Will to Live’.
According to Surajit Dhar, a prominent Indian Film Director who was also present at the launch feels that Foreign Productions, on Indian subjects are making a great impact in world market. Slumdog Millionaire is a classic case of that. “I have seen the preview of Will To Live and I believe it will be a bigger impact than Slumdog Millionaire,” added Dhar.
Posted by Films & TV World at 9:13 AM