F&TV World introduces Anand & Kiara as "Model of the Week"... 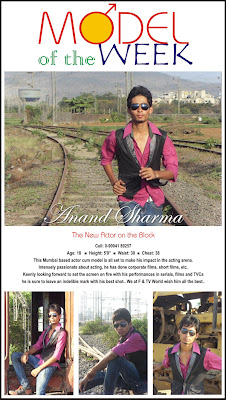 This week's Male model is "Anand Sharma" from Mumbai. A Model on the Block, Anand is interested in acting, modelling as well as TVCs. Having dabbled with corporate films, short films and the like, this Mumbai lad is now keenly focusing on improving his acting skills and is all set to do a Bhojpuri film. Keenly looking forward for an entry into the world of glamour and fame, he is sure to set the screens on fire with his talent. 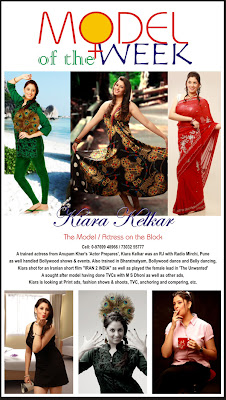 Kiara Kelkar who features as our Female Model in the same section is a model cum actress from Mumbai who has done a Marathi Serial 'Avantika' apart from a cameo in YRF's 'Rishta.com'. But her real claim to fame is the TVCs that she has done for PSPO Orient fan TVC with M.S Dhoni and which is currently playing on air. Her other TV commercials include for GITS food products, MTV promo, Parachute Hair Oil, Rexona Deodrant and many others.
Having completed her full time acting course from Anupam Kher's 'Actor Prepares', she has worked as a Radio Jockey and content producer for Radio Mirchi, Pune for over a year. Kiara has also handled Bollywood shows and events for them alongwith interviews of stars and movie launches & a lot of outdoor broadcasts as well for Radio Mirchi. Having dabbled with professional Theatre for 3 years, Kiara has shot for the Iranian short film "IRAN 2 INDIA" as well as played the female lead in the Hindi suspense thriller Movie 'The Unwanted' which will be releasing shortly. We at F&TV World wish both Anand & Kiara - all the best in their careers and wish them a fabulous future..
In case, you would like to be featured on this “Model of the week” page in our series, mail your portfolios with your contact details on filmsntv@gmail.com. And ya, no need to get disappointed if you don't find your self in the coming week. Who knows, it might be your turn next... Cheers!!
Posted by Films & TV World at 2:10 PM