That Gurudev Rabindranath Tagore is a bright sun in the Indian literary horizon, no one will doubt. But introduce cinema into the discussion, and most draw a blank. Unknown to the masses, Tagore is not just one of the most cinematically adapted writers of all time, and despite a minimal direct involvement with the medium, he has left such an indelible impact on different branches of cinema that its sphere of influence only grows with time.
Most of his novels, novellas and short stories have found their cinematic interpretation in close to 100 films in different languages globally, most notably Bengali. Besides these, there are literally hundreds of films where the branch of music he pioneered, called Rabindra Sangeet, has played an integral part. In many cases, his songs and even poems have inspired complete films.
Thus, though there are a few writers worldwide whose works have been adapted more widely than Tagore (most notably Shakespeare), there is perhaps no one who has influenced and touched cinema in so many different ways, without really getting involved with film.
Adaptations of his work in films 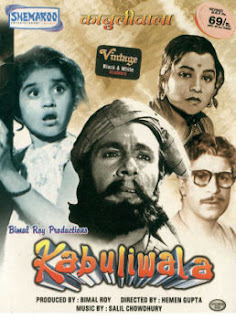 There were those that took and adapted Tagore's work religiously. But there were others who gave his work a new and different interpretation, even while maintaining the essence of the works. Two of the most important people to do this were Satyajit Ray and Tapan Sinha.  The beginning of the talkie era continued the tradition with notable adaptations being Chirakumar Sabha (1932), Sodh Bodh (1942), Gora (1938), Chokher Bali (1938) and Noukadubi (1947). Again, none of these films are available today, thus making a telling statement for the need of restoration in a country that prides itself for making the world's largest number of films annually.
The second half of the 20th century saw many more with Khokababur Pratyabartan in 1960, Megh O Roudra in 1970, Malyadaan (1971), Nishithey (1963), Streer Patra (1972), Mrinal Sen's Ichhapuran (1970), Rabibar (1996) and Rituparno Ghosh's Chokher Bali (2003) among others. In Hindi, Nitin Bose made (1947) starring Dilip Kumar, Sudhendu Roy adapted Samapti in the Malayalam film Upaharam (1972) while Kumar Shahani made Char Adhyay in 1997. Tagore's lyrical novel Sesher Kobita was improvised as a contemporary fictional drama in filmmaker Subrajit Mitra's Indo-French production Mon Amour (2008). Tapan Sinha’s "Kadambini" (A part from Sinha’s - 5 part film "Daughters of this Century" produced by Shunya Communications was adapted from Tagore’s Jibito-O-Mrito.
Not only did Satyajit Ray use Rabindra Sangeet to convey the essence of many of his films, he adapted quite a few of Tagore's stories into four films and also made a documentary on the Nobel Laureate. In 1961, Ray made Teen Kanya (Three Daughters), on three Tagore short stories - Postmaster, Monihara and Samapti. Interestingly all these three stories have been made into individual films, before and since this film. Charulata (1964) based on Tagore's short story "Noshtonir" won Ray his second Silver Bear for Best Director in the Berlin International Film Festival while Ghare Baire made in 1984 won him a Golden Palm nomination at Cannes International Film Festival.
Besides these, scores of other films in different languages and at different times have been based on Tagore's works; not just his novels, novellas, plays and short stories, but even his poems and songs. An example can be given of Debaki Bose who in an instance of rare cinematic inspiration took four poems of Tagore to make the documentary film Arghya in 1961. Many of Tagore's stories have been adapted and readapted multiple times like his story Naukadubi was adapted three times between 1932 to 1979 with a fourth to be released soon.
Tagore as Director
In 1932, on the occasion of Tagore's 70th birth anniversary, New Theatres, one of the prominent filmmaking studios, arranged the filming of Natir Puja - an adaptation of Tagore's poem Pujarini, which the poet had staged in 1927. This was the only time that Tagore was so closely associated with cinema with the screenplay being written under his guidance by nephew Dinendranath 'Dinu' Tagore and the master composing the background music, with students of Santiniketan acting in the film. Tagore not only directed this dance-drama shot over four days, but also played an important role in the film. Though the film in its entirety has been lost, a portion has been found and restored by NFAI.
Over the years, close to a 100 films, more than half in Bengali, have been made on Tagore's works, making him one of the most adapted writers of all times. This number would have been bigger if many films had not been lost forever. Also many don't even mention Tagore. Adaptations of Tagore's work just don't seem to stop with many more projects being announced in the last few years, ever since Tagore's work came into public domain. Rabindranath Tagore's contribution to cinema thus screams for a more serious attention from scholars of cinema, literature and history itself. 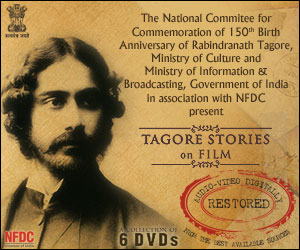 
“These films are released in DVD format as part of the 150th birth anniversary celebrations of Tagore this year. The audience needs to see these iconic films in the new formats,” said NFDC managing director Neena Gupta, who undertook the project under the direction of the Ministry of Culture.

Priced at Rs 399, this DVD set also contains “Natir Puja”, the silent film directed by Tagore himself. Most of these were lying in film archives across before NFDC decided to restore them last year. The documentary ''Natir Puja'' is a compilation of the available footage of a silent film that was directed by Rabindranath Tagore himself. This was the only film where Tagore was directly involved in the production. Shot over four days on the occasion of his 70th birthday, the film features Tagore himself in an important role.
Posted by Films & TV World at 6:01 PM