F&TV World introduces Parkash Satti as "Model of the Week"... 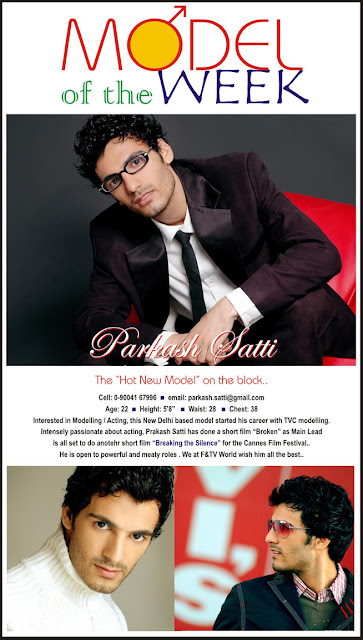 This week's Male model is "Parkash Satti" from Mumbai. Originally hailing from Delhi, this “Hot New Model” on the block, Parkash is interested in acting, modelling as well as TVCs. He started his career with TVC modeling and later joined theater to further his skills as an actor.

Intensely passionate about acting, Parkash has played the main lead in a short film “Broken” and is all set to do another short film “Breaking the Silence” which is being targeted to be showcased in the Cannes Film Festival 2012.
He is also on the verge of signing a movie in a good character role of which he is tight lipped about. He wants to speak about it once he is confirmed for the same. A fresh bundle of talent to watch out for, Parkash is also in talks with various production houses and is also looking for regional Films. His focus is clear: The role should be good and he won’t mind even doing the boldest scene, if required.
Keenly looking forward to add variety to his performance and get one the chance to experiment with roles, this young lad is sure to set a milestone for himself soon. We at FTV wish him all the best in his career and a fabulous future..
In case, you like to be featured on this “Model of the week” page in our series, mail your portfolios on filmsntv@gmail.com. Dont forget to add your contact details. And ya, no need to get disappointed if you don't find your self in the coming week. Who knows, it might be your turn next... Cheers!!
Posted by Films & TV World at 11:05 PM