Try and fulfill your wishes and dreams asap as who knows : Zindagi Na Milegi Dobara 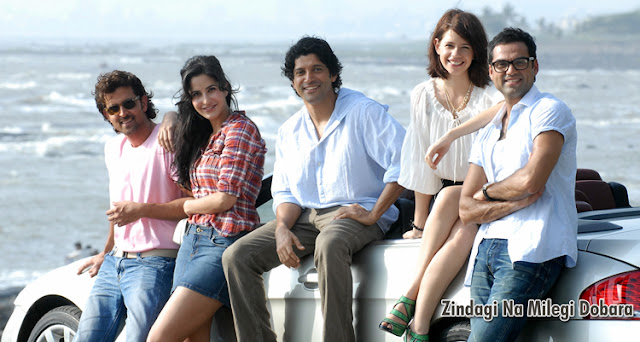 Zindagi Na Milegi Dobara (Life won't come twice) hit the theaters from today. This movie comes in at a time when Mumbai has just been rocked by blasts leaving many injured and many lives lost. As the title suggests, You wont get a new life again or Life won't come twice, it is also an ode to fulfill your dreams or wishes for which somehow we don't remove time and keep on postponing on and off for a better time. Sometimes, it just makes sense to fulfill them as you just don't know what fate has in store for you in the next few minutes, days or years.

ZNMD is a male bonding road story about three friends and exactly the quotient of today’s genX guys. An upcoming Hindi film directed by Zoya Akhtar and produced by Farhan Akhtar and Ritesh Sidhwani of Excel Entertainment, ZNMD stars Hrithik Roshan, Abhay Deol and Farhan Akhtar in pivotal roles. The story is about Kabir (Abhay Deol) who has just met Natasha (Kalki Koechlin). 6 months later they are engaged and he wants to go on an extended bachelor party to Spain. He plans a 3 week road trip with Imraan (Farhan Ahktar) and Arjun (Hrithik Roshan) - his 2 best friends since school. The only problem is Arjun is very much tied up with his professional work. After much emotional blackmailing and cajoling, the boys set off on a journey they were meant to take 4 years ago. Kabir, Imraan and Arjun meet up in Barcelona and set off on an adventure.

This is one fantasy holiday they had planned to take after college but never happened. On this road trip, each one gets to do the ultimate sport of his choice and the other 2 just have to do it with him.The female roles are played by Kalki Koechlin and Katrina Kaif where she is paired with Hrithik Roshan. Ariadna Cabrol also features in a role in the movie along with Suhel Sheth and Naseeruddin Shah in brief appearances.
Though on the outset it may seem to be inspired by "The Hangover", however, in ZNMD their girlfriends do pitch in and may not be as Zany as "The Hangover" trip was. You will get to watch Katrina Kaif ride a Royal Enfield cruiser and attempt to teach the art of deep-sea diving, Hrithik lying on the beach wearing trousers and a shirt banging away on his laptop, and sundry such enticing scenes from the film. In fact, the La Tomatina festival of Spain was re-created for the shoot of the song Ek Junoon. It was shot in Bunyol, Valencia, Spain. Almost 16 tons on tomatoes were used for the shoot and they were flown in from Portugal. The introduction scenes of Katrina was shot on a nude beach, where they had to specifically request people to stay out of the frame as the film would face objection from censor board in India. 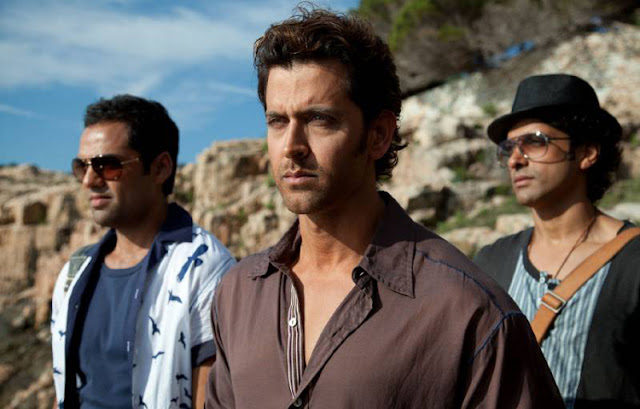 While initially it was touted as Imran Khan and Ranbir Kapoor to play two buddies given their friendship, but Hrithik Roshan and Abhay Deol agreed to play the lead roles after just one script narration. Zoya Akhtar cast her own brother Farhan Akhtar in one of the three lead roles and Katrina Kaif opposite Hrithik Roshan, as she needed a half Indian and half Caucasian girl to play the role of Laila. The music is composed by Shankar Ehsaan Loy and is already high on the charts.
Posted by Films & TV World at 4:11 PM