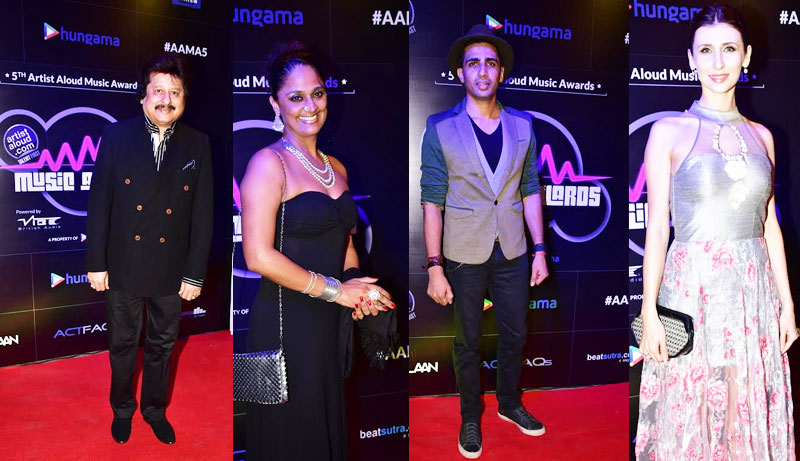 Stalwarts of the music industry came together this year, once again to applaud and lend their support to independent music artists at the 5th Artist Aloud Music Awards, a property of Hungama, Powered by VIBE British Audio, India’s only Digital Awards for Independent Artists in Music held on 20th April, 2016 at Blue Frog, Mumbai.

An evening of music and grandeur unfurled as the hosts, Luke Kenny for the main event and Mihir Joshi for the Red Carpet kept the moods light and engaged the audience. Talented artists like Rabbi Shergill, Shibani Kashyap, Sanam, Groove Yatra and many more lit the stage on fire, with their power packed live performances. Keeping in tune with their digital brand philosophy, Artist Aloud had the performances and the entire event streamed live via YouTube, Facebook and Twitter along with the Hungama Music app, reaching out to music lovers not only at the venue, but across the globe!

The 20 nominees who are forerunners of independent music, came together to celebrate ‘Indie’-pendence through their mesmerising and soul stirring performances at the event. They got together to create an anthem, ‘Jashn-e-Hungama’ - a dedication to the people who share their dream and are struggling to set foot in the industry. AMEYA, the Pop-Rock duo (Abhishek Bhhardwaj and Arsh Bashar) have written and composed this soulful and motivating piece. Leading artists like Sherrin Varghese from Band of Boys fame, Ghazal star Jazim Sharma, North Eastern Pop star John Mpamei, Ace producer Sanjay Pathak, Avril Quadros the diva and many more, contributed to this beautiful endeavour.

The public voting phase this year also received an astonishing response from music lovers across frontiers. The soaring response accounted this year garnered acknowledgments and praise from fans and the industry, as a large number of votes for the contenders came not only from India, but also from other countries.

The winning artists were presented awards by well-established musical legends from the industry and celebrities like Pankaj Udhas, Kabir Bedi, Suneeta Rao, Talat Aziz, Lesle Lewis, Sulaiman Merchant, Sushant Singh, Aftab Shivadasani, Gulshan Devaiah, Neeraj Roy, Soumini Sridhara Paul and many more. The presence of these musical legends was an encouragement for these independent artists and indeed made this year’s awards ceremony better than ever before.
Posted by Films & TV World at 8:27 AM