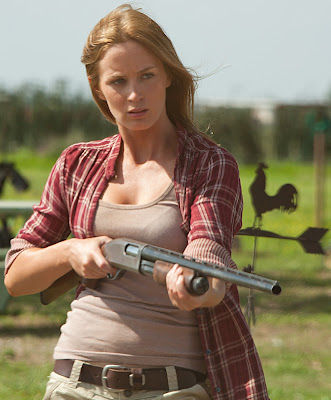 British actress Emily Blunt seems to be quite taken by Indian designers.  After recently adorning designer Naeem Khan’s dress from the Fall 2012 Ready-to-Wear collection for an event, the ‘Looper’ actress has taken a liking to popular Indian designer duo Falguni and Shane Peacock’s designs. The beautiful British actress revealed she would love to adorn an outfit designed by them on the red carpet. The actress commented, “I love experimenting with different couture and international designers. I have noticed their edgy designs on the red carpet and would absolutely love to wear something by them.”
.
The actress, who has already received widespread acclaim for her role as a fashion fanatic in the box-office hit ‘The Devil Wears Prada’, is known for her chic style and recently sizzled on the red carpet in a maroon dress at the premiere of her new film ‘Looper’, which also stars Joseph Gordon-Levitt and Bruce Willis in the lead.  Looper is an upcoming sci-fi action thriller that is all set to be released on October 12 by Multivision Multimedia in Indian theatres. The film was the opening movie at the Toronto International Film Festival and has already received rave reviews by critics."Looper" actress Emily Blunt loves creations of Indian designers.
Posted by Films & TV World at 11:41 AM