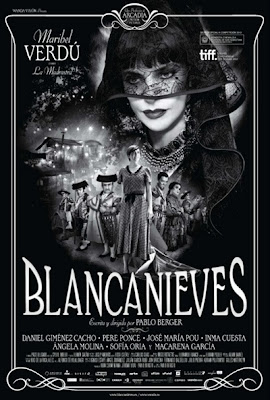 As the city’s most eagerly awaited cultural event, the 14th Mumbai Film Festival, presented by Reliance Entertainment and American Express and organized by the Mumbai Academy of Moving Image draws closer, it has been revealed that this edition of the festival will conclude with the screening of Blancanieves as its Closing Film, a 2012 black-and-white silent Spanish drama film directed by Spanish auteur Pablo Berger.

The film is the official Spanish entry for the Best Foreign Language film at the 85th Academy Awards in 2013. Having premiered at the prestigious Toronto festival, the film won the Special Jury Prize and an ex-aequo Best Actress "Silver Shell" Award for Macarena García at the 2012 San Sebastián International Film Festival. Mumbai Film Festival is the third only film festival where the film is set to be showcased.

Having earned praise at the two international film festivals, Blancanieves is set in a romantic vision of 1920’s Andalusia and depicts the original story in a new and culturally specific context. The film inspires a strong sense of cinematic nostalgia and has been rumored to be a tribute to 1920’s European silent films, liberally mixing humor and melodrama.

Carmen (Macarena Garcia) is a beautiful young woman with a childhood tormented by her terrible stepmother, Encarna (Maribel Verdu). Running from her past, Carmen, will undertake an exciting journey accompanied by her new friends: a troupe of dwarves Toreros. An original vision of a classic tale, it is set in the south of Spain in the 20's, full of adventure, excitement and humor. With a surprise ending, in Blancanieves we discover that life is not like in the stories.

The festival promises to feature a lineup of over 230 movies with special event segments dedicated to French, Italian, Afghan and Indian cinema as well as silent films accompanied by a live orchestra. The 14th edition of the Mumbai Film Festival will be held from the 18th – 25th October, 2012 atNational Centre for the Performing Arts (NCPA) & Inox, Nariman Point, Liberty Cinemas, Marine Lines as the main festival venues and Cinemax, Andheri and Cinemax Sion as the satellite venues.
Posted by Films & TV World at 12:16 PM