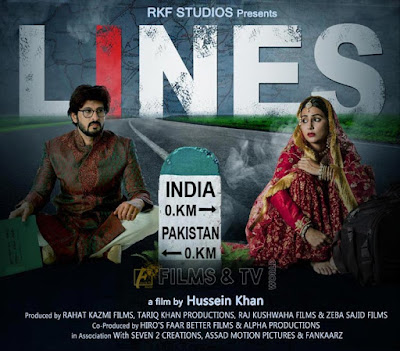 Hina Khan is one of the biggest names in the television industry, and now, she is trying to make a mark in Bollywood as well. Last year, she made her big screen debut with the film Hacked, and now, her next release Lines is all set to premiere on Voot Select.

A few days ago, Voot Select had announced The Voot Select Film Fest in which they will be premiering many interesting films and one of them is Lines. The first look poster of Lines was unveiled at Cannes Film Festival in 2019, and fans of Hina have been eagerly waiting to watch the film.

On Thursday, Hina took to Twitter to announce the premiere date of Lines. She tweeted, “Presenting LINES on @VootSelect on 29th of July. So honoured that LINES is a part of Voot select film festival and like the poster launch (in Cannes) LINES is releasing in India with the line-up of some amazing films featuring stunning actors and directors.”

This time Hina will be paired against the handsome actor Rishi Bhutani who started his career with Bolo Raam with stalwarts including Padmini Kolhapure, Om Puri & Naseeruddin Shah. The thriller film Vodka Diaries directed by Kushal Srivastava was his last theatrical release before Corona shut the theaters all across the country. Apart from Lines, he will also be seen in Bed No.17 that is directed by Mir Sarwar.

Meanwhile, Hina is also enjoying on the success of her song Baarish Ban Jaana which has received 200 million plus views on YouTube. The song has her romancing Shaheer Sheikh the leading heart throb of the television industry. She tweeted about it, “#BaarishBanJaana hits 200 million+ views on YouTube! Thank you everyone for making this track most memorable for me! Also, setting new records each day, trending on most platforms & radio channels! This Baarish season agar #BaarishBanJaana nahi suna toh Kya kiya! @VYRLOriginals.”

You can catch the trailer of Lines here: