The Great Indian Escape - Nothing to be excited about 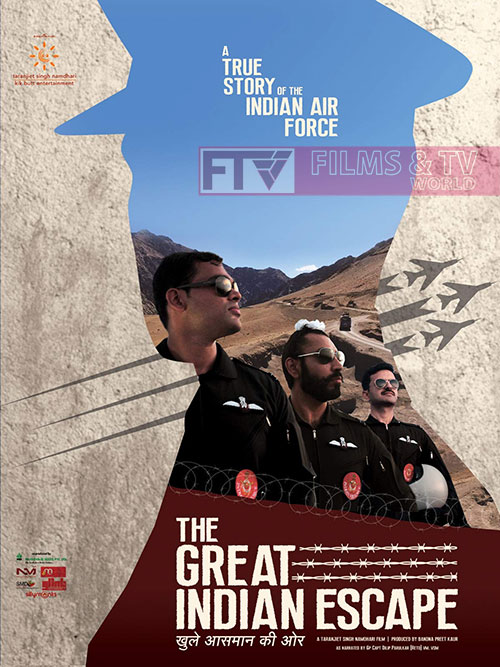 War films and especially those related to Indo-Pak or anything related to terrorism is a regular fare on every OTT these days. One such film is The Great Indian Escape -Khulay Asmaan Ki Oar by Taranjit Singh Namdhari which is streaming on MX Player now. It is based on the lesser known but true exploits of three brave heart POWs from Indian Air Force who dared to do the impossible and escape from a Pakistani prison.

When Pakistan’s Lt Gen A.A.K. Niazi formally surrendered to his Indian counterpart, Lt Gen Jagjit Singh Aurora on 16 December 1971 during the liberation of Bangladesh, Indian and Pakistani Prisoners of War were still languishing in jails of both the warring nations. However not all chose to sit back and wait for their freedom. One such brave heart pilot from the Indian Air Force Flt Lt Dilip Parulkar wanted to put his training to good use. From flying into Pakistan and successfully bombing targets followed by his subsequent crash and capture, it is the story of his trials and tribulations. Not only did he escape but also inspired two more PoW Pilots Flt Lt MS Grewal 'Garry' Flt Lt Harish Sinhji 'Harry' to partake in the most outrageous prison break in Pakistan and fly their way to freedom.

Agreed all heroism need not display heroics but TGIE neither created enough drama or the necessary thrills and tension as a precursor to the daredevilry, but failed to even work up enough emotional storm to give goose bumps. It is just the name that catches the fancy. However, the film does not live unto its title. Neither this film evokes strong feeling of patriotism or nor is crisp and edgy. There were no Eureka moments, no nail biting finales - The escape was just circumstantially simple. Even more than that, it’s the plot that derails so badly with the story so casually written that you badly want it to end. While the story may have been very exciting on paper as it was written by Capt. Dilip Parulkar himself, authenticity is not to question here. However the replication of the daring prison break seemed very superficial as Taran took the true story of unassuming inspiration and presented it as a just a matter of fact depiction of history as it happened - a la docufiction.

Coming to acting histrionics, the least said the better. While Raaj Singh Arora as 'Garry' and Asheesh Kapur as 'Harry' stand out, Anuj Khurana as Corporal Ehsan with his dimpled looks manages to leave his mark in a role smaller than the others. As for Raghav Rishi who played Parulekar, the least said the better. It seems criminal to me why the director wanted to cast someone who was so flat in his expressions and unable to carry the film on his shoulders.
Frankly, the legitimacy of a true story of the valour and gumption and the indomitable spirit of the IAF officers during the 1971 Indo Pak war should have been an added impetus for the audiences to watch the film. But the story fails to resonate with the adventurous prison break stories that one either reads or sees. It just hits a road block, a dead end and you wonder why at all it was even made.
Posted by Films & TV World at 7:50 PM