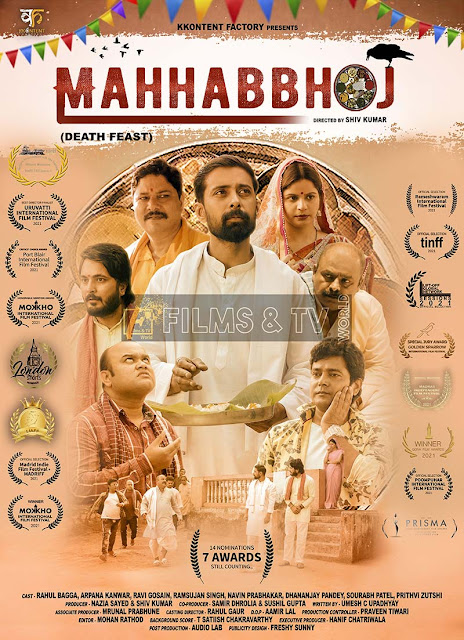 Rahul Bagga starrer upcoming web film Mahhabbhoj is all set to premiere on PAUS TV (UK) on 3rd August in their Paus Premiere Festival. This web film is rated amongst the top 10 films selected films by PAUS TV after thousands of submissions around the world. Apart from Rahul Bagga who’s made a commendable name for himself be it in the world of movies, series or short films, the film’s other ensemble cast includes Arpana Kanwar, Ravi Gosain, Navin Prabhakar and others.

Directed by Shiv Kumar, this film is a commentary on the society rituals especially on the glorification of Mrityubhoj (Feast to appease the soul of the departed) culture in Hindu religion and the superstitious beliefs of people around it. “For the unknown, Mahhabbhoj is a tradition of throwing a grand feast on the thirteenth after a cremation for the liberation of departed soul. It is believed that this feast helps the soul, find heavenly abode. At this event, the entire community is fed a lavish meal in the hope to garner peace and blessings for the departed. The feast is later extended to the relatives, neighbors’ and the rest of the village. However, in contemporary times, Mrityubhoj has become a reflection of a family’s social standing. Even the poorest of poor are compelled under circumstances beyond their control to organize large death feasts, taking a toll on their very existence,” said Shiv Kumar. The narrative follows the story of the protagonist who takes a stand of not performing the ritual against the will of everyone including his wife, how the whole village goes against him with their superstitious beliefs and what he finally does to make them understand the truth.

Sharing the news about the film and its successful stint, director Shiv Kumar mentioned that he wishes to work on a Dogri film soon and hopes that the Dogri Film Industry also flourishes like the other successful regional industries like Punjabi, Marathi and South India. When asked how the idea of this film germinated, he narrated that it was the writer Umesh Uphadhay’s idea which has an important social aspect, and we felt that this issue needs to be addressed. Shiv Kumar also mentioned that a lot of people have been raising voice against this customary social ritual for long. It’s only recently the Rajasthan Government took a major step in this regard and completely banned it.

Shiv Kumar was born and brought up in Jammu city and always had an interest in Film Industry. He completed his graduation from Delhi University and started pursuing his dreams. After passing out from a film school he made his debut short film “No Freedom To Love” which premiered at Zurich International Film Festival, Switzerland as well made its way to Dada Saheb Phalke Film festival, 2013 edition.

Produced by Nazia Sayed and Shiv Kumar of Kkontent Factory, Mahhabbhoj that made its round at various festivals is winning accolades nationally and internationally. Till date, it has won 15 awards and 22 Nominations across the Globe including London, Kuala Lumpur and TINFF, Toronto.