Oldman (Gary) receives his first ever Oscar nomination in his career 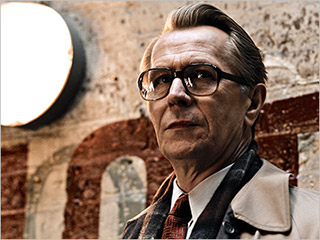 An active thespian for almost 33 years, Gary Oldman has received an Oscar nomination for the first time ever in his career. Describing his first ever Academy Award nomination as 'extremely humbling' as he took to the red carpet with his stunning wife for the German premiere of Tinker Tailor Soldier Spy in Berlin last night, the 53-year-old British actor looked like on cloud 9 - the cat that got the cream.
Tinker Tailor Soldier Spy is a 2011 British espionage film directed by Tomas Alfredson, from a screenplay written by Bridget O'Connor and Peter Straughan based on the 1974 novel Tinker, Tailor, Soldier, Spy by John le Carré. The film stars Gary Oldman as George Smiley, and co-stars Colin Firth, Tom Hardy, John Hurt, Toby Jones, Mark Strong, Benedict Cumberbatch and Ciarán Hinds. Set in London in the early 1970s, the story follows the hunt for a Soviet double agent at the top of the British secret service.
The film was produced through the British company Working Title Films and financed by France's StudioCanal. It premiered in competition at the 68th Venice International Film Festival. The film received generally favourable reviews and was the highest grossing film at the British box office for three consecutive weeks.
Posted by Films & TV World at 8:26 AM