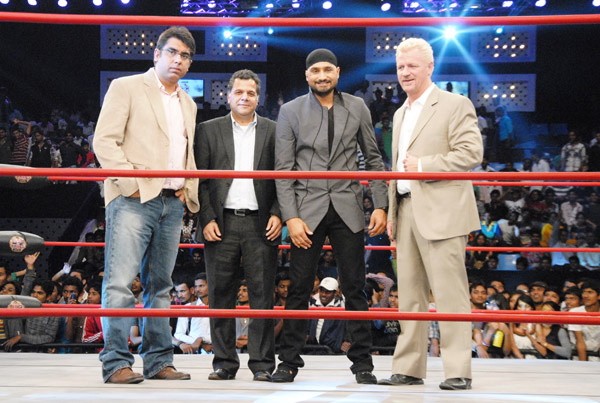 International wrestling superstars as Jeff Jarrett, Matt Morgan, Scott Steiner and Monster Abyss participating in the show, Channel Colors ropes in cricketer & Mumbai Indian’s Captain Harbhajan Singh as the goodwill ambassador.
After having entertained India with their impressive bouquet of fiction shows, format shows and a number of successful reality shows, Colors, India's leading Hindi General Entertainment Channel is all set to introduce a fresh format to its audiences. For the first time ever, the channel is launching the biggest sports entertainment reality show called 'Tata Prima Trucks Ring Ka King' which will feature 30 top Indian and international wrestling superstars including Jeff Jarrett, Matt Morgan, Scott Steiner and Monster Abyss; Indian wrestlers who have received international-level training like Jwala, Mahabali Veera, Romeo Rapta, Zoravar and Deadly Danda amongst others. And the Indian cricket superstar Harbhajan Singh has been roped as the goodwill ambassador. The show will bring to audiences a mix of drama and reality by adding some Indian tadka to the good old wrestling matches that we have grown up watching in a grandiose and glitzy manner. Tata Prima Trucks presents Ring Ka King – Wrestling Ka Mahayuddh will go on air on Saturday, January 28th 2012 at 8 PM with subsequent episodes airing on Saturdays and Sundays at 8 PM only on Colors.
Speaking about the show Colors CEO, Raj Nayak said, ''Colors has always vowed audiences with some of the biggest reality shows like Bigg Boss, Khatron Ke Khiladi, India's Got Talent and now we are proud to present yet another explosive first of its kind sports reality show – Tata Prima Trucks Ring Ka King'. Coming down to participate in the show are international wrestling sensations. India, for the first time will witness the excitement of a sport and the intensity of a drama, both rolled into one.
He further added “We truly believe that the show will appeal to our viewers and advertisers who are constantly looking for new and innovative platforms to reach out to their audiences. We are glad to be working with Tata Prima Trucks and hope that our relationship only grows hereon.”
In what could be called a modern day clash of the Titans some of the world's most renowned wrestling superstars will be seen battling Indian pehelwans to capture the title of 'Ring ka King’. Tata Prima Trucks Ring Ka King will be a modern day wrestling show that brings together the TNA wrestling superstars and the Indian pehelwans to fight for the title of “Ring Ka King”. In the first four weeks of the show, audiences will see nerve-racking matches that will crown a ‘Heavy Weight Champion’ and a ‘Tag Team Champion’. During the subsequent weeks, the champions will have to save their honor and title and fight against the other contenders who will come their way and throw challenges to claim the belt. Through the show, audiences will get an insight about the intricacies of wrestling and what goes into making a show as enjoyable as this.
Speaking about his association with Tata Prima Trucks presents Ring Ka King, Harbhajan Singh, Goodwill Ambassador, Ring Ka King said, “As a kid, I have always been interested in wrestling. Mein bachpan mein Judo champion hua karta tha. Par uske baad cricket meri life ban gayi. Varna shyaad mein Olympic Judo Champ hota. Being on the cricket pitch has given me the right fighter attitude that is essential to control these wrestlers. I am extremely charged for Ring Ka King. After many years, here’s a mind-boggling reality show that is a perfect mix of action, sports and entertainment that will keep audiences on the edge of their seats.”
Explaining the concept of the show further Deepak Dhar, MD, Endemol India said, ''It's an exciting format for us to work with. For the first time ever we are combining sports and entertainment to create something very different and very exciting. While the focus of course will be on the wrestling matches, it is the entertainment and the drama aspect of the show that will put the matches in perspective making them a lot more interesting. Endemol has entered into a partnership with TNA Entertainment, LLC to popularize professional wrestling. Endemol fulfils its commitment to India by constantly bringing best-in-class entertainment to India. ''
Jeff Jarret from TNA, who represents the international wrestlers participating in the show said, ''Tata Prima Trucks Ring ka King is a very exciting project for us at TNA. We know TNA has a lot of fans in India, especially younger fans, so the enthusiasm levels are higher than ever. At the same time, the format of the show is very interesting which will allow fans to see their favourite wrestling stars as not just wrestlers but real people. Of course, we are looking forward to put on an adrenaline filled show that will get all our fans super excited! Let’s see who out of these 30 amazing wrestlers beats the rest to take away the title of ‘Ring ka King’!''
On being title sponsors for the show, Mr. Vinod Sahay, Head- Sales & Marketing, Medium & Heavy Commercial Vehicles of Tata Prima Trucks says, “We believe integrating our majestic Tata Prima heavy weight trucks with Ring ka King represents a natural fit for both our brand and the show. The Prima range of trucks, tractor trailers and tippers bring to India international standards of power, performance and endurance, which ties in very well with the Ring ka King format which aims to bring international standards of wrestling to our country incorporating the same attributes of power, performance and endurance.”
Tata Prima Trucks presents Ring ka King – Wrestling ka Mahayudh will be debuting on Colors on 28th January 2012 and will be telecast every Saturday and Sunday at 8 PM.
Posted by Films & TV World at 12:06 AM