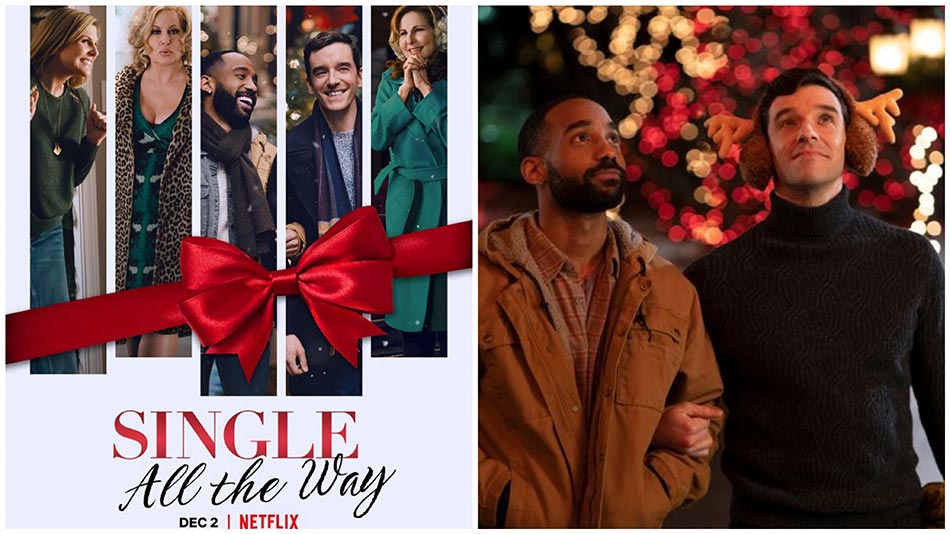 Netflix’s Christmas offering ‘Single All the Way’ is a 2021 Canadian Christmas romantic comedy film directed by Michael Mayer and written by Chad Hodge.  With an underlying theme of love and acceptance, ‘Single All The Way’ blossoms into a funny, delightful, and heartwarming romcom gift for all.

The plot follows a young gay man (Michael Urie) who convinces his best friend (Philemon Chambers) to pretend to be his boyfriend when he goes home for Christmas, only to be set up on a blind date by his mother (Kathy Najimy). Luke Macfarlane, Barry Bostwick, Jennifer Robertson, and Jennifer Coolidge also star.

The film was released by Netflix on December 2, 2021. Critics praised the film's depiction of gay characters in an everyday setting, but criticized the script's usage of tropes common to the Christmas romantic comedy film genre.

The plot revolves around Peter, a social media strategist living in Los Angeles, who is tired of his entire family asking him about his single status each year when he visits them for the holidays. He is excited to bring his new boyfriend Tim to New Hampshire to meet them, until he finds out that Tim is married when Tim's wife hires Peter's best friend and roommate Nick as a freelance handyman. Devastated, Peter convinces Nick to travel to New Hampshire with him and pretend that they are dating. Before they can announce their fake relationship, Peter's mother Carole tells him that she has arranged a blind date between Peter and her spinning instructor James. Peter reluctantly agrees with encouragement from Carole and Nick.

The rest of Peter's family arrive: his father Harold, his sisters Lisa and Ashleigh and their respective families, and his aunt Sandy, who directs the annual children's Christmas pageant. Harold privately tells Nick that he has always thought that he and Peter would be perfect for each other, and that Peter seems happiest when he is with Nick. Meanwhile, Peter goes on several dates with James, including buying a Christmas tree and a day of skiing. They enjoy themselves, though Peter repeatedly brings up Nick in conversation and he begins to feel torn between spending his limited time with James versus his family. He tells Nick that he is considering moving back to New Hampshire, to Nick's dismay.

Peter's boss calls him to tell him that they are abandoning their latest advertising campaign and instructs Peter to develop a new campaign, featuring "real people" instead of models, within the next day. Harold, who is trying to get Peter and Nick to spend more time together, suggests photographing Nick; though Nick is initially reluctant, the photoshoot is a success. Lisa's daughters, Sofia and Daniela, are also rooting for Peter and Nick to get together. They force Nick to admit to himself that he is in love with Peter, and they later pretend to fall asleep in Peter's bed so that he has to share Nick's bed. The next day, Sofia and Daniela talk to Peter who tells them that he has feelings for Nick but is afraid to risk their friendship. Aunt Sandy's Christmas pageant is a success thanks to the help of Peter and Nick.

Afterwards, Nick confesses his feelings to Peter, who is still fearful that a relationship could put their friendship in jeopardy. He tells Nick that he has decided to move back home. As Peter heads to the bar with James to celebrate the pageant's success, Nick packs his bags and prepares to return to Los Angeles, but takes on one more handyman job of re-painting a shop whose owner is retiring. James tells Peter that they are not a match for each other and that Peter belongs with Nick. Peter rushes home to find Nick gone. He sees Nick's rental car at the shop, and Nick tells him that he has paid the first six months of the shop's rent as a Christmas present to Peter, who has always wanted to open a plant store. Peter finally tells Nick that he is in love with him, and they share a kiss. On Christmas Day, they announce that they are dating and plan to move to New Hampshire together, to the delight of Peter's entire family.

If you haven't had a chance to stream it yet, do it now for the funniest and most heartwarming movie this Christmas.. Catch the trailer if you still harbour doubts..