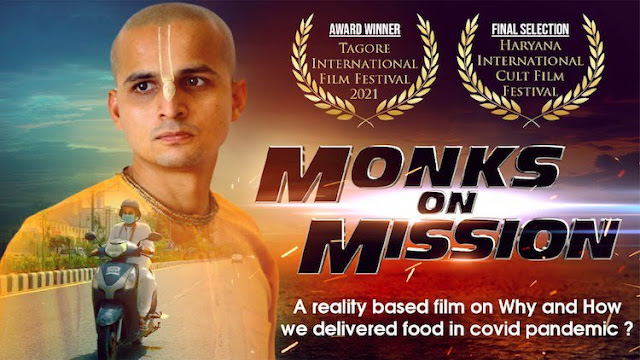 A thought provoking short film, ‘Monks on Mission’ made by seven monks at Iskcon Gurugram under the guidance of temple president Rambhadra Das, has won the Best Documentary Award (Runner-Up) at the 15th Ayodhya Film Festival (AYOFF) end November.

Monks on Mission is a reality-based film on why and how monks delivered food in deadly Covid 2nd wave. The life of monks is all about decreasing their personal needs and increasing service to God and humanity. But one day they had to choose between service and their life.

The 11-minute film is written and conceptualized by monk Padasevan Bhakta Das, directed by HG Rambhadra Das, President, Iskcon Gurugram, and the editing, shooting, and sound design was done by Pankaj Shyam, who was a Freelance Graphic Designer before becoming a monk. A total of seven monks - Aradhya Gaur Das (lead), Sri Nitai Das, Sevya Giridhari Das, Parmatama Hari Das, Rakesh Roshan, and Rahul Jhanghu, along with Padasevan in a small role - have acted in the film. Padasevana Bhakta Das has not only acted in it but is the scriptwriter of this wonderful film. In charge of the communications department of Iskcon Gurugram, he also shared a number of behind the scene information with us.

Life of monks is all about decreasing their personal needs and increasing service to God and humanity. But one day they had to choose between service and their life. If they decide to go out for service, they could get Covid infected, as the 2nd Covid wave ravaged through India. Getting infected would also mean not even receiving a hospital bed and for sure losing life while gasping for oxygen. But, if they decide not to serve, thousands in their city will be at high risk. Did they perform their duty or step back? This exciting film, based on real events, and based on the Covid-aid program, it portrays how a group of devotees helped the desperate Covid-affected families in getting meals every day.

”I had an interest in representing Krishna consciousness in a visually appealing format.” says Padasevana who is also a graduate in Mechanical and Automation Engineering from Delhi. “But these covid times made us realise that even this service could be taken across to people to encourage them, to motivate them to serve people."

"However, this wasn't an easy task. There were many challenges we faced. Our temple is a very new one, so we don't have many resources. And in spite of that, we, the Brahmacharis here, decided that we should go ahead, and help the people of Gurugram in these difficult times. Initially we did not think of doing a short film or a documentary on the same. We were just shooting randomly for uploading videos on YouTube. It was however the idea of Rambhadra Das (the director) to make a short film instead of releasing small videos on YouTube,” he adds.

However this effort has borne fruits and has won the Best Documentary Award (Runner-Up) at Ayodhya Film Festival. It also won the Outstanding Achievement Award at the 24th monthly season of Tagore International Film Festival (TIFF) in early July. It was also a Finalist at Haryana International Cult Film Festival.

“We also intend to come up with many more short films, which are for devotees and non-devotees alike,” Padasevana clarifies. “We wish to make films for a very broad audience. We want to take them out to people who may never come across a book of Prabhupada or who may never come to sit in a Bhagavatam class or who may never get associated with devotees,” he concluded.