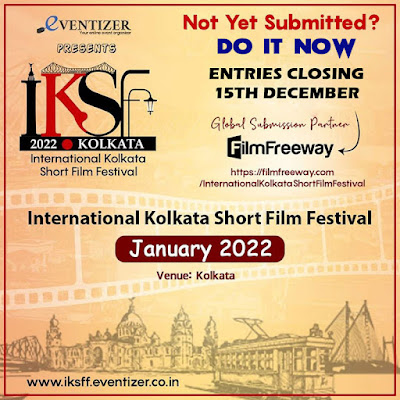 Have you sent your film to the 2nd edition of the International Kolkata Short Film Festival? If not, do it now as the submission closes on 15th December 2021.

Just two weeks after the 27th Kolkata International Film Festival concludes, it’s time for Kolkata cinephiles to enjoy some more good shorts and documentaries in the City of Joy.

Seeking to impress the cinephiles with a myriad of shorts and documentaries from the best of creative minds across the globe, the 2nd edition of International Kolkata Short Film Festival will kick start from 22nd January 2022. A hybrid festival organised by Eventizer, the festival will flag off with online screening on its website from 22nd to 29th January 2022. The week-long fete will feature international documentaries, short fiction and non-fiction, animation as well as public service films. However, the festival will also have a physical screening followed by an award ceremony on 30th January 2022 at Rotary Sadan, Kolkata.

According to an official of the IKSFF, the hybrid event is being conducted keeping in mind the Covid protocols and in adherence of the same. However, with so many wonderful films by talented young makers making its way to the festival, the authorities also planned to have a one day closing program with the Awards presentation to honour them for their work and to celebrate their talent.

The online event will be a paid event, for the audiences to watch all the selected films at their own sweet time from the comforts of their home. “It will be one of the major cultural showcases for audiences from any part of the globe as they would no longer need to be physically available to savour the best of films showcased at the festival,” confirmed the source.

Filmmakers who have not yet submitted their wonderful films at the festival can now do so. The Late Deadline closes on 15th December 2021. You can submit your short films through Film Freeway or log on to their website for more details.