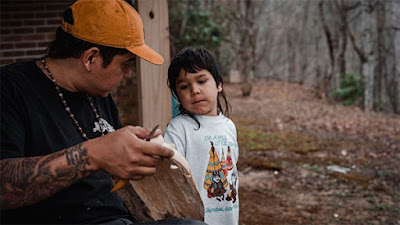 Today the Sundance Film Festival announced that ᎤᏕᏲᏅ , a new documentary short film by Brit Hensel with Keli Gonzales, is an official selection in the 2022 festival. According to the Sundance Institute, Hensel is the first woman who is a citizen of Cherokee Nation to direct an official selection at the festival. The film's world premiere will be held in-person in January 2022 in Park City, Utah, as well as online from January 20th – 30th. ᎤᏕᏲᏅ "Udeyonv" (pronounced oo-de-yo-NUH) is one of seven films from season one of Reciprocity Project, a co-production of Nia Tero and Upstander Project.

ᎤᏕᏲᏅ (What They've Been Taught) explores expressions of reciprocity in the Cherokee world, brought to life through a story told by an elder and first language speaker. The film circles the intersection of tradition, language, land, and a commitment to maintaining balance.

"It is important to us that ᎤᏕᏲᏅ includes the perspectives of western and eastern Giduwa (Cherokee) people. Although our communities are separated by distance, our collaboration on this film offers a balanced perspective of what reciprocity means to our people and how it's actualized in our lives," said Hensel, who is a 4th World Media Lab Fellow, a 2022 Tulsa Artist Fellow, and works on the series Reservation Dogs on FX.

The film is already garnering high praise. "Brit Hensel weaves a tender and beautiful portrait of quiet yet necessary teachings that connect notions of land, home, and family, and shows us the ways in which the everyday is built upon layers of memories of the past, the joys of the present, and the hopes for the future," said Sky Hopinka (Ho-Chunk Nation/Pechanga Band of Luiseño Indians), an acclaimed filmmaker.

ᎤᏕᏲᏅ  was created in collaboration with independent artists from both Cherokee Nation and the Eastern Band of Cherokee Indians, filmed in North Carolina and Oklahoma, and produced by Taylor Hensel (Cherokee, who is also Brit's sister), Adam Mazo, Kavita Pillay, and Tracy Rector as part of Reciprocity Project, which seeks to embrace the value of reciprocity through Indigenous perspectives through storytelling, film, podcasts, and other creative mediums. The ultimate goal of Reciprocity Project is to create a paradigm shift that reframes our relationships to the Earth, other living beings, and one another.

Learn more ᎤᏕᏲᏅ and the other Reciprocity Project films at reciprocity.org.