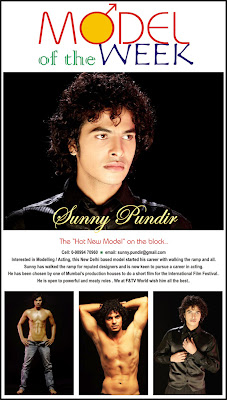 In our Model of the Week Page, this time we are featuring absolutely two new fresh faces who hold a lot of potential. Going a bit off the route by not featuring popular models whom we see everywhere, we have zeroed in on these two mainly as they come armed with loads of talent. 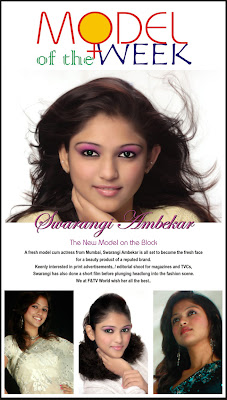 This week's Male model is "Sunny Pundir" hailing from Delhi. This “Hot New Model” on the block, Sunny who doesn’t bat an eyelid to even do nude modeling or strutting on the ramp in his basics is interested in acting, modelling as well as TVCs. He started his career with walking the ramp for reputed designer and is a often seen face on the ramp.
Intensely passionate about acting, Sunny is also keen to get onto the acting scene. He has recently been finalized by a Mumbai based production house to do a short film targeted to be showcased in the International Film Festivals. However, he is tight lipped about the same and says will reveal once the shoot is over.
A fresh bundle of talent to watch out for, Sunny is also in talks with various agencies and production houses for furthering his career on the TVC scene. Keenly looking forward to add variety to his kitty and get one good chance to experiment with roles, this young lad is sure to set a milestone for himself soon as his focus is clear: I want to be a name to reckon.
Swarangi Ambekar who features as our Female Model in the same section is a fresh model from Mumbai. She started her career with a short film for the Gorbastchow Short Film Contest and is recently selected to be the fresh face for a popular cosmetic brand. Having dabbled with Fine Arts for her studies, Swarangi is all set to give her modeling career a flying start. We at F&TV World wish both Sunny & Swarangi - all the best in their careers and wish them a fabulous future..
In case, you like to be featured on this “Model of the week” page in our series, mail your portfolios on filmsntv@gmail.com. Dont forget to add your contact details. And ya, no need to get disappointed if you don't find your self in the coming week. Who knows, it might be your turn next... Cheers!!
Posted by Films & TV World at 9:34 PM