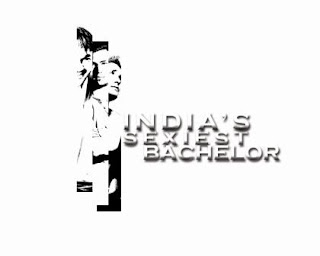 India’s Sexiest Bachelor is all set to have heart beats racing this weekend with four handsome hunks vying to claim the top spot in the race to be crowned India’s Sexist Bachelor.
The first head-on collision will be between Kareena Kappor’s ex and current boyfriends - the Chote Nawab, Saif Ali Khan and the chocolate boy Shahid Kapoor tomorrow - Saturday August 13, 10.00 pm…
The Chote Nawab may be planning to marry Kareena in 2012 but his stock value among the women only continues to grow. The Prince Charming even today, in spite of his steady girl friend Kareena has girls drool over him. Saif is a thorough gentleman and that reflects in the way his fans mob him– they don’t seem to care that he was once married or has two kids or is even dating the beautiful Kareena. In fact from being taken for a spoilt brat in Bollywood, today he is looked upon as a dependable star. If the Chote Nawab is your choice of India’s Sexiest Bachelor just log on to www.facebook.com/bigcbsprime or SMS ISB <space> <03> and send it across to 55454.

Besides having Kareena as a girl friend, there are several similarities between Shahid and Saif, including the fact that their first movies were released when they were 22 years old! At an early age, people started betting on Shahid Kapoor as a luminous Bollywood star. But it was only after Jab We Met that Shahid could establish himself as a force in Bollywood. Shahid can be a man and a boy at the same time, a quality that has earned him millions of female fans.  Women love the innocent face and the big eyes, which combined with a hot bod makes Shahid Kapoor every woman’s dream.
If you too want to make sure that Shahid Kapoor is India’s Sexiest Bachelor logon to www.facebook.com/bigcbsprime or SMS ISB <space> <03> and send it across to 55454.

Its newbie Ranveer Vs hotie Neil Nitin on Sunday…
Ranveer Singh & Neil Nitin Mukesh, who will be on India’s Sexiest Bachelor on Sunday August 14, at 10 pm, are both capable of having women crave for their attention.
With his ‘die for’ international looks and light eyes, Neil Nitin Mukesh has caught everyone’s fancy right from the day he made his debut in Johnny Gaddar. His box office film New York went on to establish his popularity & his acting skill. Coming from an elite Bollywood lineage, Neil is someone who tops as far as being sexy & suave is considered. Woman love the frank, emotional and dependable Neil.
If you have been swept off your feet by Neil’s good looks and charm then vote for him and make him India’s  Sexiest Bachelor .Just log on to www.facebook.com/bigcbsprime or pick up your cell phones… type ISB <space> <04> and send it across to 55454.
Ranveer Singh, the newest heartthrob has a very unconventional looks and may come across as a brash young man. But his ‘I don’t care’ attitude is getting his women fans chasing him. In addition to this is his discerning smile and the boy-next-door looks makes him a  strong contender for the sexiest bachelor in India.
If you like the rugged & charming hero then vote for Ranveer by logging on to www.facebook.com/bigcbsprime or pick up your cell phones… type ISB <space> <04> and send an sms to 55454. Stay tuned to India’s Sexiest Bachelor every Saturday & Sunday at 10.00 pm only on BIG CBS PRIME.
Posted by Films & TV World at 3:03 PM