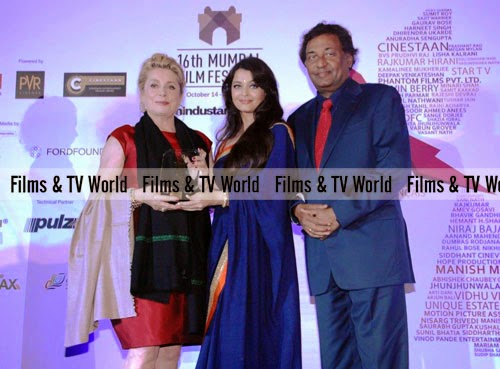 It is that time of the year when Mumbai gets its annual fix of the best international cinema. The 16th Mumbai Film Festival, organized by the Mumbai Academy of Moving Image (MAMI), an 8-day film extravaganza opened today with internationally acclaimed film ‘Serena’ starring Jennifer Lawrence and Bradley Cooper in the lead roles.  The festival was officially inaugurated by the gracious and acclaimed actor Aishwarya Rai Bachchan. The 16th Mumbai Film Festival grand venue of Chandan Cinema was transformed by veteran art director Nitin Chandrakant Desai to portray the old world cinema movie theatres, creating a wow factor amidst the invited guest.

The opening ceremony itself was a star-studded affair with the who’s who of the tinsel town and Mumbai’s business elite extending their unwavering support to the festival with their attendance. The opening ceremony commenced with a speech from noted filmmaker and MAMI Chairman, Shyam Benegal in the august presence of cinema patrons including producer director Vidhu Vinod Chopra, iconic Bollywood actors Aishawarya Rai Bachchan, Akshay Kumar, Ranbir Kapoor, Deepika Padukone, industrialist Niraj Bajaj and Ajay and Sanjeev Bijli among others.

The venue echoed aloud as the opening address from Shri Shyam Benegal, Chairman, MAMI met a roaring applause. His words, “Nothing succeeds like success and this year’s MAMI stands testimony to that. On behalf of MAMI I thank everyone who made our dream to make this year’s festival happen despite all odds, a reality. It was Anupama Chopra’s relentless pursuit to bring together the film professionals to not only help run but also finance this iconic festival for the first time ever. Not only that, contribution also came in the form of crowd funding and I hope this new form of support continues for years to come,” besides setting the tone for the festival, left an indelible imprint on cinema lovers who thronged to witness the opening ceremony of the festival they waited for all year round.

Acclaimed Actress Aishwarya Rai Bachchan while declaring the festival’s open expressed her innate love for the Mumbai Film Festival. She commended MAMI for marvelously showcasing world cinema year after year and giving every cinema-goer a reason to look forward to an annual feat of films. Her words of appreciation, “Kudos to the entire team, especially Anupama and everyone who kept the flag of the festival flying with their belief, conviction, and excitement,” were graciously received by everyone whole tirelessly worked towards making the 16th Mumbai Festival possible with added grandeur. 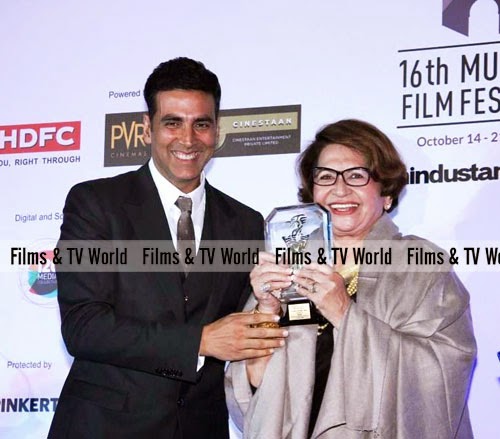 The quintessential Chandan Cinema resonated with applause as globally acclaimed veteran French actress Catherine Deneuve and yesteryear actress and Bollywood’s diva Helen were conferred with the coveted Lifetime Achievement Awards for their outstanding contribution to the world cinema. Catherine Deneuve stepped forward amidst a roaring round of applause, to receive the award from the iconic actress Aishwarya Rai and Niraj Bajaj. Soon after, a rousing welcome greeted Helen when Kalki invited her on stage and talented actor Akshay Kumar escorted the living legend to bestow the Lifetime Achievement honor up on her on behalf of MAMI. Akshay particularly commended Helen for her inimitable dedication and vast body of work.

The actress praised for her iconic portrayals of her iconic characters and today a proud recipient of Lifetime Achievement Award at the 16th MAMI festival, Catherine Deneuve shared, “Lifetime achievement is a strong word and comes with the feeling of moving on. But I wish to be here and around for many more years to come. India is so much the country for cinema like France and it is a great privilege and honor to be here and receiving this award.”

An overjoyed Lifetime Achievement Award recipient, Helen emanating her evergreen charm was short of words to express her heartfelt excitement and delight as she thanked MAMI and said “Coming from Burma at the age of 4, starting my film career at 13 to working in many different films till today, I have come a long way in this journey of a thousand miles. I thank the film fraternity and MAMI for their love and this special award.”

Elated at the opening day response of the festival, Mr. Srinivasan Narayanan, Director, Mumbai Film Festival said, “It is a proud and a humbling moment. I am glad that all the hard work paid off. With so much love on the opening day itself, I feel assured that the next 7 days will continue to receive this warmth from the film fraternity patrons and cinema lovers.”

Shri Shyam Benegal, Chairman, MAMI congratulated everyone who stepped forward to bring his vision for this year’s festival to life and expressed, “My sincere thanks to members of the film industry and business world who offered their unconditional support in every form this year. I am extremely grateful to Anupama Chopra, Anand Mahindra, Rohit Khattar, Vidhu Vinod Chopra, Raju Hirani, Hansal Mehta and many others who contributed to this exciting day and week ahead. Your support helps me believe that we will continue to celebrate Mumbai Film Festival for years to come. ”

Day 1 with all its vivid shades proved to be a perfect start to a festival that features an engaging lineup of screenings. Of course, this was just the beginning. An exciting line up of international film cutting across language barriers and genres are all set to mesmerize film lovers through the next seven days.

The 16th edition of the Mumbai film festival organized by the Mumbai Academy of Moving Image (MAMI) will be held from 14-21 October 2014 at the PVR Cinemas in Andheri, Cinemax in Versova and Chandan Cinemas. The festival has a lineup of about 185 films from over 65 countries.