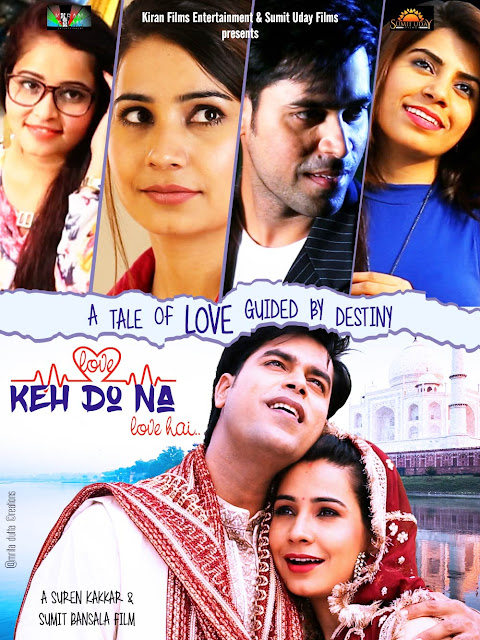 As part of their Friday endeavours, the team of Keh Do Na Love Hai has released the first poster look on Facebook and other social medias today. Offering a realistic take on relationships peppering the film with witty, charming and delightful moments, Keh Do Na Love Hai is a thrilling saga of love, romance and flirting, carefully woven around a chronology of actual events.

Set in Mumbai, Keh Do Na Love Hai is the story of a rich spoilt brat who chases every girl in town till he meets the girl of his dreams. It’s the story of the young and boisterous college-going male protagonist Kush Kapoor aka Kaks who has not a care in the world and lives life on his own terms. To him, life means chasing his girl friend’s till one of them gets engaged to an NRI. It’s only then that he realizes that cupid has struck him and feels that they are made for each other. However he is in a dilemma as he is yet to propose to the girl and is even not aware whether she harbors the same feelings as him. When Kaks proposes her, she in fact tells him Keh Do Na Love Hai.

Romance blossoms. But in this ever-changing dynamics, will their love be accepted? Will they get their parental approval and their relationship bind in marriage? Has the idea of love and romance in a conventional Indian family undergone radical changes in this 21st century. Maybe not. They are yet to learn that love and life isn't that simple. They face roadblocks. And the very life changing decisions that they thought is right puts them through various trials and tribulations until they realize true love.

“Guided by love, passion and ambition and cushioned with sparkling moments, it is unconventional, but fits beautifully as the lovers do think from the heart, not mind, and this aspect comes to the fore fittingly. The film should appeal to its target audience - the youth and the family audiences,” says Sumit Bansala, the joint producer of the film.

"There are love stories. And there are romantic sagas helmed by makers that tackle modern day love relationships most adroitly. However, Keh Do Na Love Hai is a contemporary love story with its heart in the right place. The film has several wonderful moments and genuine sparks that stay with you. With characters identifiable and their conversation real, it is written in such a way that it will make you re-live your own love life. It's like sitting in a cafe or eatery and overhearing the conversation of the lovers and presenting the lovey-dovey talks / bickering in the most compelling manner,” concluded Suren Kakkar, producer of the movie who has also written the story and screenplay of the film. The film is loosely based on his own life and experiences.
Posted by Films & TV World at 8:00 PM