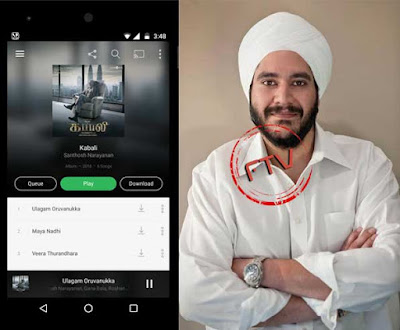 Superstar Rajinikanth’s Kabali music album has generated a staggering 3 Million streams on Saavn, India’s leading music streaming app, and the number is only increasing by the minute. With this, Kabali has become the highest streamed Tamil album in its month of release.

The Kabali mania has gripped the world beyond comprehension.  The album, composed by Santhosh Narayanan has seen an overwhelming response from Saavn listeners across the world showing repetitive listening patterns, hence transcending social and cultural barriers.

The ‘Neruppu Da’ song from Kabali has been extremely well received by Saavn listeners and continues its trail blaze to be the #1 song on Saavn’s weekly Tamil Top 15 countdown.

“Tamil is one of the most streamed regional languages on Saavn and Kabali’s success reaffirms that, apart from Hindi and English international, Indian regional language music continues to be popular on Saavn globally,” Paramdeep Singh, Co-Founder and Executive Chairman of Saavn said. “The Kabali album is all set to enter the Top 10 streamed Tamil albums of all time on Saavn soon. It is clearly one of the most talked about regional albums of the year thus far.”

Paramdeep Singh (Param) is Co-Founder and Executive Chairman of Saavn. Param spends most of his time overseeing all content acquisition, business development and user growth. He has been instrumental in sourcing and developing key strategic partnerships with major media, telecom, and technology companies, including T-Series, Saregama, Sony Music, UMG, Samsung, Micromax, Airtel, Idea, Tata Docomo, and many more.

Commenting on the record-breaking streams, Swaroop Reddy, President, Think Music, says, “We, at Think Music, are immensely thrilled to know that the audio of Kabali has achieved a record number of streams on Saavn. We have always believed in the power of the streaming medium. The milestone of Kabali hitting a record 3 Million streams proves how Tamil music lovers prefer to stream their favourite Tamil songs on Saavn. This record is just the beginning, we look forward to creating many more such milestones on Saavn.”
Posted by Films & TV World at 11:39 AM