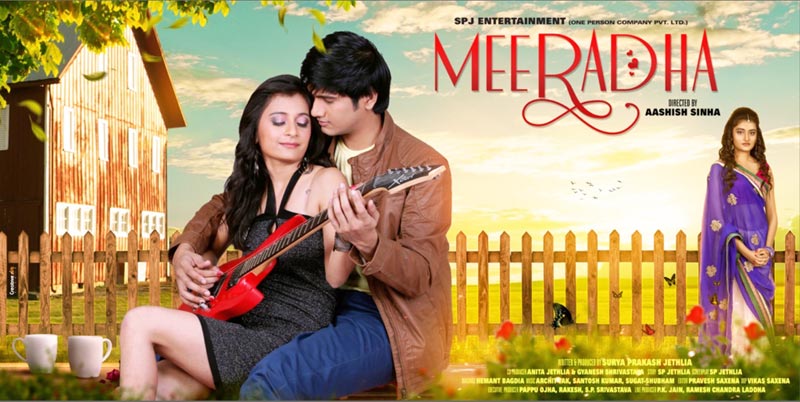 This young man is all set to make his debut in Bollywood with Ashish Sinha's film 'Meeradha'. A bundle of talent, actor Sandesh Gour, known for his roles in 'Saraswati Chandra' and 'Meri Aashiqui Tum Se Hi', is all set to dazzle the audience post Independence Day on the big screen.

Sandesh who has been around on the telly and short film circuit is debuting with this film. “My debut film is about love, friendship and family values. Set in the backdrop of Rangeelo Rajasthan, I am playing the character of a young positive guy and it will trace my journey from a college guy to a mature responsible man, fulfilling his duties. Though 'Meeradha' is a youth oriented film, it carries a social message, which will influence the young generation in a positive way, I hope," said Sandesh.

When asked if he was nervous or prepared, he shares: “I’m very confident about my debut film. But at the same time, I am a bit nervous and much excited about the project and I sincerely hope people really like me in this character. A full on commercial film albeit with a message, in this film I am doing what every actor wants to do. Yes, I am chasing women, doing masti in college, singing songs as well as taking the film to its logical and meaningful ending. It's my first romantic film, and naturally it's very dear to me.

When questioned about choosing this film to mark his debut, Sandesh says, “I always wanted to have a debut film that projected me with a lot of confidence and director Ashishji showed me that confidence in this script. I just hope that I get to be a part of some real good films in future that will mark my journey as an actor in the industry.”

Speaking about the action and dance sequences, Sandesh says that they are high-octane. We went all out as wanted to show what I was capable of since it’s my launch film. Also, our producer Mr. Surya Prakash Jethlia along with director Ashish Sinha wanted to showcase his actor with lots of potential. Though it was challenging for me, but now when I look back I’m happy that I did it because it’s really going to look gorgeous on screen.

Sandesh will be seen opposite two beautiful ladies Suhani Jethlia and Venus Jain. He is full of praise for both and says, “They are worth watching out for. Meanwhile, the film’s first copy is ready along with the trailers, promos and posters. The film has gone for censors as the producers are planning for a mid August release. Currently the team is busy with strategic planning and is eager to start the promotions from mid July on FM, Television, Theaters, Outdoor Publicity including hoardings, buses, etc."

“The team is also planning a grand music launch as Meeradha is a musical love story with some beautifully composed songs by Archit Tak, Sugat Dhanvijay - Shubham Sundaram and Santosh Kumar. The songs are rendered beautifully by renowned singers like Shaan, Javed Ali, Raja Hasan, Shahzad Ali and Santosh Kumar which are sure to pick up on the charts,” added Sandesh.

Talking about his future plans, Sandesh says that he wants to try out a variety of roles and not just get relegated to romantic teeny boppy goody goody characters. I have big aspirations as I want to be known as a director’s actor and not just as a star.

Early this year, Sandesh was in the news as his short film ‘Muafinaama’ won the Best Audience Award at the International Film Festival of Prayag at Allahabad. The film that deals with the issue of girl child abandonment has picked up five awards till now. When asked if we are gonna see him on the small screen as well as shorts in future too, he says with a grin on his face: “Yes, ofcourse, you will see me on the small screen at times too. I genuinely want to try and do films and TV together. Though I have moved onto the big screen for now, I don’t mind doing shorts even if the subject and the theme is really good and is definitely hatke,” signed off Sandesh.
Posted by Films & TV World at 3:07 PM