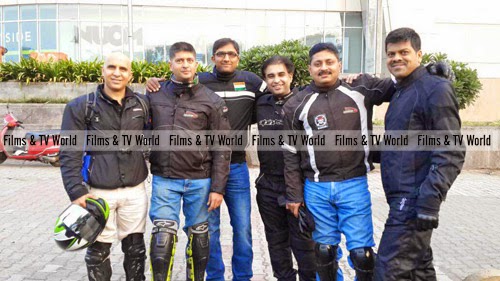 The Tri city edition of Chai and Pakoda ride which had riders join in from the city of Pune, Aurangabad, Ahmednagar, Beed& Mumbai created a record of sorts as over 250 bikers and pillion riders came together at 7 am on a Sunday morning to be a part of the amazing brotherhood that is the bikers of India. IBW’s ‘Chai &Pakoda’ ride started from a suburban location in Pune to popular chai &pakoda joint VithalKamats on the Ahmednagar-Pune road situated about 100 kms from Pune and once on the highway, it was like a river of liquid fire that went as far as the eye could see.

Chai and Pakoda rides are organised to bring bikers together regardless of the machine they ride. From Pulsars to Harley-Davidson’s to KTM’s to Triumphs, riders from the 5 cities powered up their hobby motorcycles out to join and meet like-minded people, enjoy a good breakfast and celebrate this amazing year and the friends that they made along the way. The organizers also made the format all the more interesting with Biker Games like Coolest Looking Biker, Best Looking Bike, Oldest Bike, Safest Biker, Arm Wrestling and more. The biggest club turnout wasGreaseballs from Ahmednagar.

Commenting on the astonishing response to this year’s Tri City edition of Chai &Pakoda ride Martin da Costa, CEO of 70 EMG said “It’s great to see the enthusiasm with which the biking community from Pune and other cities has received this ride. The primary reason to organize Chai and Pakoda rides is to gather people in a community regardless of what they ride. And taking this thought forward we have created one of India’s biggest ever Festivals –India Bike week, which is one of the biggest gathering for hard core bikers, fans of the two wheeler way of living, travellers and India’s many music and Festival Fans. It’s going to be a great party, and we’re already working with the hundreds of Bike Clubs in India, as well as international Bikers, brands, customizers, bike and accessory manufacturers, and musicians to make this an amazing weekend. It’ll be a one hell of a ride!”

Another highpoint this year was the announcement on “IBW Sweepstakes” wherein festival goers who buy their festival tickets online on a specific date stand a chance to win exciting prizes like subscriptions to AutocarIndia, Rynox Jackets, Go Pro cameras, Casio watches, AGV helmets and much more. Sweepstakes will be done every three weeks and the next onesare announced for 25th Nov, 16th Dec, 31st Dec, 21st Jan & 11-14th Feb.


IBW in its 3rd season has clearly won the confidence of sponsor brands, which is clearly seen through its additional sponsors: Bike manufacturers Triumph Motorcycles, DSK Bennili and Piaggio which will be represented by all 3 of its brands – Aprilla, Moto Guzzi& Vespa are all on board for the 2015 season. In addition, brands like brands like Zippo, Wrangler, Jameson& Red Bull have also confirmed their participation.
Posted by Films & TV World at 12:00 PM