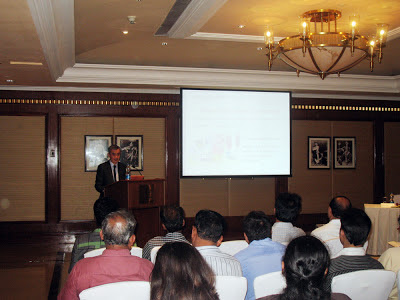 To be held at the Marina Bay Sands Singapore from 18 - 21 June, BroadcastAsia2013, Asia’s largest and most established media & communications event, is set to feature groundbreaking technologies, and spotlight hottest industry trends for the broadcast and film value chain.

Growth in Indian Broadcast industry
The Indian Media & Entertainment industry grew from INR 728 billion in 2011 to INR 820 billion in 2012, registering an overall growth of 12.6 per cent. Given the impetus introduced by digitisation, continued growth of regional media, upcoming elections, continued strength in the film sector and fast increasing new media businesses, the industry is estimated to achieve a growth of 11.8 per cent in 2013 to INR 917 billion. Going forward, the sector is projected to grow at a healthy CAGR of 15.2 per cent to INR 1,661 billion by 2017, according to the FICCI – KPMG Media & Entertainment 2013 report.

The report also states that although television will continue to be the dominant segment, strong growth is posted by new media sectors, animation/ VFX and a comeback in the Films and Music sectors on the back of strong content and the benefits of digitisation.

Film digitisation and TV distribution infrastructure, growth in new media like increase in mobile and wireless connections; greater sophistication of and segmentation in content with digitisation and finally encouraging regulatory and policy support has been a key enabler of growth for the Indian media sector. The continued cable DAS rollout, Phase 3 licensing for Radio and 4G rollout this year will spur growth from the medium term.

BroadcastAsia2013 registers strong Indian participation
Speaking at the press conference held today in Mumbai, Mr. Calvin Koh, Assistant Project Director for BroadcastAsia from organiser Singapore Exhibition Services (SES) said, “With the advent of innovative technology and the recent large scale digitisation, Indian broadcasters and consumers are both at a threshold of a technology revolution. As demand grows for advanced technology and content for the dynamic Indian audiences, the industry, like never before, is embracing world class practices and formats. BroadcastAsia2013 is an ideal platform for the Indian players to partner with world leaders as well as reach out to clients beyond India.”

BroadcastAsia2013: Integrating Technologies, Experiencing Content
With the rise of Smart TVs and the blurring of the boundaries between TV and social networks, consumers will be watching TV within social networks and vice versa, impacting the way they engage with TV. BroadcastAsia2013 will be addressing this latest phenomenon with showcases from leading industry bigwigs, as well as up-to-date conference topics, such as 4K TV, OTT, Multi-Screen Streaming, DVB-T2, Satellite/Terrestrial/Cable Broadcasting, Production and Post-Production Software and many more


To complete the entire value chain, ProfessionalAudioTechnology2013 will see professional audio companies showcasing the latest audio products and services for the broadcasting and film ecosystem.

The highly anticipated Cinematography/Film/Production Zone will once again return this year to provide visitors with comprehensive updates on featured technologies such as Animation and Video Effects, Motion and Film Production, Camera, Lenses and Tripods and beyond.

Complementing conferences to complete the visiting experience
As Asia’s film and TV industry continues to flourish, the BroadcastAsia2013 International Conference progresses to the next level with four new tracks, four specialised sessions and for the first time, a half day workshop. This will focus on the shift in consumer demand for high quality content on-the-go, on multiple platforms and the emerging business opportunities for OTT in Asia. More than 100 speakers from 31 countries/regions will lead the numerous discussions over four days.

The Creative Content Production Conference, back for its fourth successful year, is themed “Producing and Distributing Successful Content in Asia.” The conference will address the challenge of producing appealing and high-quality content for global audiences. Numerous industry stalwarts – AETN All Asia Network, Fox International Channels, Lucas film Singapore, Sony Pictures Television and Viacom International Media Networks, to name a few – will provide their insights on the future of the industry at the two-day conference. A series of new topics and speakers including a ‘Producers Dialogue’ have been developed to serve as additional forums for participants to address and anticipate the upcoming trends and demands of the industry.

COMMUNICASIA2013 and ENTERPRISEIT2013: Optimising Business Opportunities
CommunicAsia2013 and EnterpriseIT2013, held alongside BroadcastAsia2013 at the Marina Bay Sands, will feature a complete range of key technologies, such as cloud computing, enterprise mobility, mobile broadband and applications, developments in LTE/4G as well as Over-the-Top (OTT) and more. EnterpriseIT2013 will also highlight the latest technology solutions for enterprises from different vertical industries such as Banking and Finance, Education, Government, Healthcare, Hospitality, and Logistics and Transportation.

The last edition of BroadcastAsia, together with CommunicAsia, attracted close to 2,000 exhibitors and over 50,000 professional attendees from around the globe.
Posted by Films & TV World at 9:50 AM