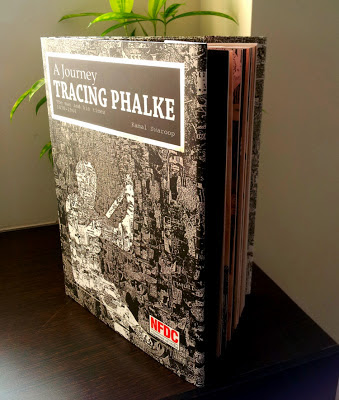 Celebrating the completion of an action packed cinematic century of Indian Cinema and the genius of Dadasaheb, NFDC (National Film Development Corporation) is pleased to announce the release of the limited edition of Tracing Phalke- researched, written and compiled by Kamal Swaroop, a film, television and radio director and screenwriter, more popularly known for his masterwork Om-Dar-B-Dar (1988).

A text-based visual treat that lends a magnified view into Dadasaheb's life, the iconic coffee table book is an eponymous compilation tracing the life span of the Father of Indian Cinema, with rare details right through his schooling, places he visited, people he met and experiences that lent value to his innate genius and imagination that eventually lead to the birth of Indian Cinema.

Speaking on this occasion, Director Kamal Swaroop, said, "I am happy that Tracing Phalke will be re-released this year just around the date of Indian Cinema completing a glorious century. And considering that NFDC is a harbinger in fostering and promoting Indian Cinema, associating with them couldn't have been more apt for this initiative.

"Tracing Phalke is a very insightful compilation of Dadasaheb Phalke's life by Kamal Swaroop and we are delighted to present this visual treat for film aficionados and the fraternity in this centenary year of Indian Cinema, said, Vikramjit Roy, General Manager- National Film Development Corporation.

The NFDC was formed by the Government of India with the primary objective of planning, promoting and organizing an integrated and efficient development of the Indian film industry. With more than 300 films in 18 regional languages, many of which have earned wide acclaim and won national and international awards, NFDC's architecture aims towards creating doemstic and global appreciation of the Cinemas of India. Apart from its unique positioning in the film industry as a film development agency, NFDC also functions as a business unit by producing advertisement campaigns supplemented with 360 degrees support to government clients.

To get hands on your copy of Tracing Phalke, please contact: thirdpoliceman007@gmail.com
Posted by Films & TV World at 7:25 PM