My actors, with almost no film experience did their part brilliantly which make this film look so innate and so fresh: Sanghamitra Chaudhuri 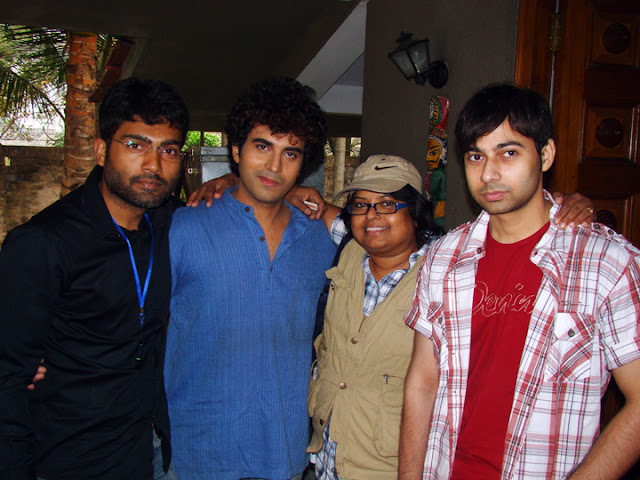 The ace Bengali director Sanghamitra Chaudhuri who is debuting in Bollywood with “Strings of Passion” is very excited to showcase her skills in Hindi. After doing more than 10/12 films in Bangla language in a row, she has taken her baby steps into Bollywood with a hard hitting theme coupled with rock music and romantic interludes. The film has already won a couple of awards including the Best Film award. Films & TV World got candid with this talented director and talks of her journey from Tollygunge to Bollywood.

FTV: How did you come up with the idea for Strings of Passion?
Sanghamitra: I have been a senior school teacher once upon a time. I have been immensely popular amongst my students. I have interacted with them, dealt with their various mindsets, threats, emotional stature and most significantly noticed, boys and girls with unsteady family milieu suffer from severe diffidence. They fall prey to various addictions, behave in immature way and are vulnerable to all kinds of emotional repression. Strings of Passion knits neatly 3 such stories of three young men. 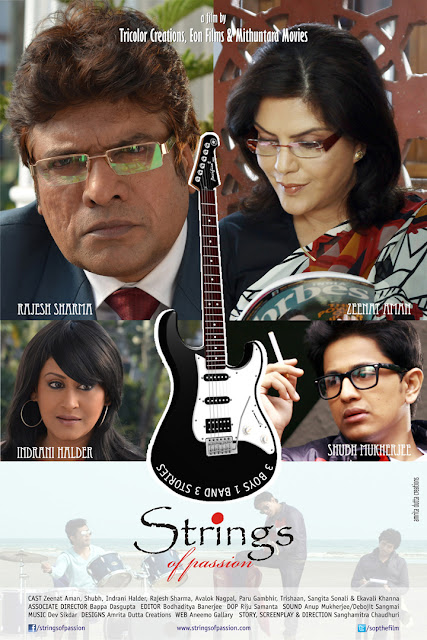 FTV: Tell us about your film Strings of Passion.
Sanghamitra: Strings of Passion is an urban flick with 3 good stories neatly interwoven. Shot in the City of Joy, it has 6 beautiful songs (Composed by Dev Sikder) and great performance by a handful of newcomers like Trishaan, Avalok Nagpal, Paru Gambhir  Sangita Sonali and Saqi. The film also includes great actors like Zeenat Aman, Rajesh Sharma, Shubh Mukherjee and National Award winner Indrani Halder.

FTV: You have always worked with brilliant actors like Jackie Shroff, Indrani Halder, Chiranjeet Chatterjee, Paoli Dam, and many more. Then why did you choose to add a fresh lot this time around?
Sanghamitra: The colour of this cinema is skin-tone.. No make-up, no added costume, no acting, no starry gloss… simple behaviour and next door look was the demand of this movie... I opted for a few popular faces like Zeenat  Aman, Indrani Halder or Rajesh Sharma to add a bit to its commercial obligations. But honestly speaking my new actors, with almost no film experience did their part brilliantly which actually make this film look so innate and so fresh.

FTV: Tell me your experience with the actors? What's your favorite part about working with this particular cast?
Sanghamitra: Making of this film was not a cake walk. It is my first Hindi Film. I myself, being a part producer, I had to keep both creative and commercial part well balanced. My actors are like my own kin and we all stayed together in a guest house, discussed film, worked hard and at the end partied harder. Zeenatji was like a God Mother, always encouraging me, and also cooperating with all production shortfalls till the last day of her shoot. 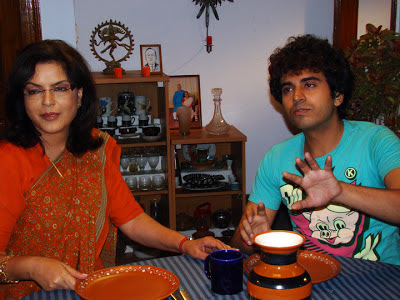 However, I was more worried about getting the right nuances from Avalok Nagpal who is playing Manu. Though he is a theatre trained actor, getting him to do the character of Manu was the biggest challenge as his character is pretty effeminate. He had to play a kinda effiminate guy yet not turning a gayish caricature as is normally shown in Bollywood. His character was soft, introvert but he is not gay. Naturally the over done to death kinda gay character was not what I wanted. And for that, I with my Associate Bappa Dasgupta had repeated reading sessions and workshops so that he easily slipped into the role. And am happy that Avalok gave his best shot and didn't let me down. And this reflects in the two awards that he received as Best Actor.

FTV: Bad Parenting is becoming a major issue these days with both parents working. What influenced you to go about with this subject?
Sanghamitra: In most of the families both husband and wife slog hard to earn more and more. But the net result may not feed to their core desires. Thus frustration accrues which is ultimately vented through domestic combats. Children suffer enormously and such situations create scars on their tender psyche.

FTV: You have also touched upon a very sensitive issue of Male Rape in your film. Do you think today’s audiences are ready for it?
Sanghamitra: Sexual abuse has become a daily occurrence. Media only highlight oppression of the fairer sex. Young women falling prey gets abundant news value. But even male rape is common in this society. In college hostels, work place, parties, prisons or other corners such incidents do occur. I don’t know how will our society react to this paranoia, but it is true and an alarm for those who are unaware..

FTV: The personality of a director reflects in his or her cinema. How much you see of yourself or your issues in SOP?
Sanghamitra: I have been counseling youngsters once I began to understand them as a teacher and friend.. This cinema is so locked to my heart where Neel, Manu, Amit, Insia, Komal or Tuktuki are simply close to my skin, as if I meet them every day.. see them sob or smile and every bit of this film is just every household’s indoor or may be next door affair, comprehended through an audio visual media.. 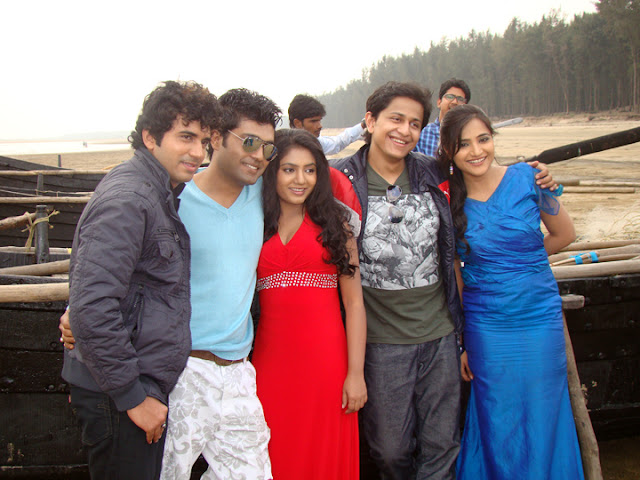 FTV: You have worked with two powerful sound engineers - Anup Mukherjee and Debojit Sangmai in the film. How powerful is the soundtrack?
Sanghamitra: The film is all about performances and an intense and emotional family drama. And all my actors have come up with very good performances. Naturally to complement such good performance you need solid good soundtrack. And the Music and Sound are the solid assets of this film. The 5.1 surround makes you feel so close to the scenes and situations.. especially I remember Anupda creating the audio of an aero plane soaring high against a visual where Neel and Insia discuss their dream standing on the top floor of a 35 storied building. Another sound effect of a well, where Tuktuki takes out a bucket of water, was the visual, the iron bucket falls banging on the walls deep in the water, the echo and the resonance along with the splashing sound made me awestruck..

Debojit Sangmai the sound designer for Barfi, Heroine and other big Bolly-flicks did the final mixing for us along with Anup Mukherjee - his Teacher, sitting beside him. It was an awesome experience. You need great theatres with best sound equipment to do justice to such great work.

FTV: You are a known name in Bengali Film Industry with hits to your credit. How did you think of making a movie in Bollywood?
Sanghamitra: It’s like a foreign trip for a tourist who has been visiting places in her homeland. It’s a regional film maker’s dream. Tollywood is like home. Bollywood is like staying in a five star hotel.. pinches the pocket, but at the end of the day it gives the best..

FTV: This is your first Hindi and Bollywood and you managed to bag not 1 but 4 awards. How does it feel? 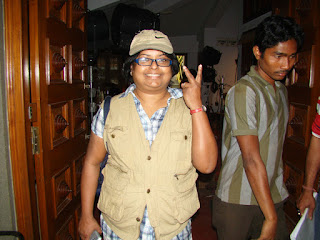 Sanghamitra: Everybody is happy the way the film has shaped up and this is speaking by way of awards. Honestly speaking each award is like a new feather being added on the crown. But the crowning will only happen when it hits the box office and the mass will appreciate our work… I am restless... I am eagerly waiting for that day.

FTV: Your future projects?
Sanghamitra: I have completed shooting of ‘Kuch Alag sa’ produced by Eon Films very recently. I am working on a script in travelogue style for my next Hindi project..  A Bengali film, Chhaya Judhho is ready for release too.

FTV: Final words?
Sanghamitra: Thanks to my team, all my actors, technicians, business associates and friends who are helping me from day one till date to make this film a success.. Last but not the least, a request to all film lovers, please watch film in theatres to get the best out of it and to contribute to anti- piracy movement.