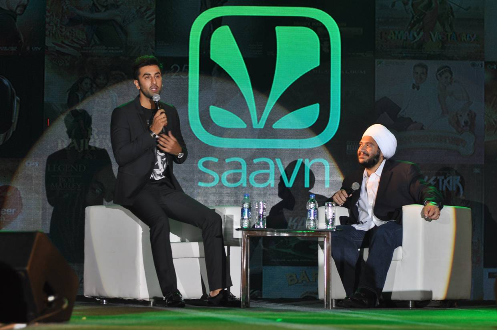 Saavn, the world’s leader in digital streaming for Indian music, is announcing today a first-of-its-kind partnership with Bollywood actor, Ranbir Kapoor. The well-known actor is joining the Saavn team as a creative collaborator in a capacity that is far beyond the conventional celebrity brand endorsements that are seen frequently in India. Kapoor will work side-by-side with the Saavn team on consumer marketing ideation and production, business development and content. The partnership has initially materialized in the form of a new commercial campaign featuring a 30 second television spot, billboards and theatrical ads. Kapoor provided a significant amount of input on the creative for the campaign, and the TV commercial was written by Vasan Bala, who is the screenwriter for Kapoor’s new film, Bombay Velvet, alongside Sneha Mehta and Teddy Stern of Saavn.

“I’ve been using Saavn for years now, so it’s exciting to be working with the team on a deeper level. I’ll be helping to guide the brand, influence programming, connect with the next generation of music listeners and ultimately help build the best music product in India, and potentially the world,” Kapoor said. “And this is only the beginning. I look forward to being involved in a more business-centric capacity in the near future.”

“It felt right from the beginning. Everyone involved in this partnership is truly passionate about the product, but there’s also a very human connection here, as well,” Singh said. “We couldn’t be more thrilled to welcome such a grounded yet creative-minded individual into our family. Our collaboration with Ranbir represents an evolution in the way technology companies and artists work together in India. And that bridge between art and digital is at the very heart of what we want to accomplish at Saavn.”

Saavn released a sneak-peek of its alliance with Kapoor in its “Here’s to the Music” campaign that went live earlier this year. The commercial campaign being announced today was produced by Golden Gaddi Films, the ad production house of Guneet Monga who is the producer of The Lunchbox. The 30-second ad can be viewed at: https://www.youtube.com/watch?v=PKFqtQn_6zw.


The digital music company, which boasts a catalog of almost 2 million tracks from both Indian and U.S. record labels, will be rolling out a suite of new consumer-facing products and partnerships over the next couple of months, in which Kapoor’s input and ideation will play a major role.
Posted by Films & TV World at 12:00 AM