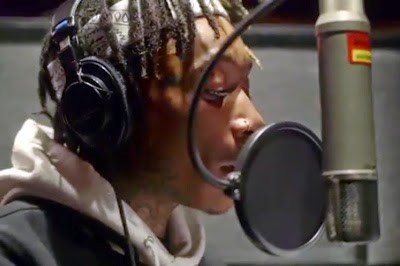 Popular American rapper, singer and song writer Wiz Khalifa is the greatest fan of the Teenage Mutant Ninja Turtles (TMNT) series. Hence the makers of this upcoming action packed film TMNT decided to collaborate with him for the Theme song ‘Shell Shocked’. The rapper has come together with Juicy J and Ty Dolla $ign for this EDM-infused hip-hop track. This new video gives his fans a chance to watch and hear the rapper on as he raps this new track and shares his experience of writing this song. The video also has glimpses of Wiz Khalifa recording ‘Shell Shocked’.

Watch Wiz Khalifa as he sings for his favourite film: https://www.youtube.com/watch?v=LKeJnTcxVIg

Wiz Khalifa is known to be one of the biggest fans of the TMNT series and also has a tattoo of Donatello on his leg. The video of ‘Shell Shocked’ released earlier this week and has received a massive response from fans worldwide. The song is in sync with the film aptly depicting the adventurous, humorous and never says die spirit of the Turtle brothers.

This song is Wiz Khalifa’s tribute to the TMNT series and the amusing yet brave Ninja turtles Leonardo, Donatello, Michelangelo and Raphael. Produced by Kill the Noise and Madsonik and featuring singer-songwriter Moxie Raia, ‘Shell Shocked’ is an EDM-infused hip-hop track that finds Wiz, Juicy J and Ty singing the awesome lyrics.

Watch the video here to see Wiz Khalifa’s love for the Ninja Turtles...