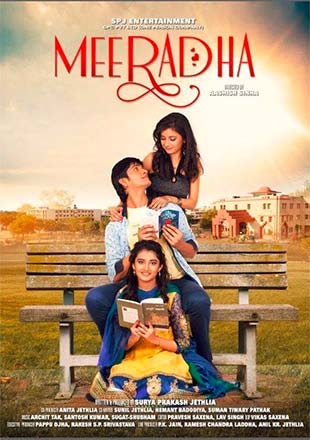 Meeradha is a contemporary love saga of Krishna, Radha and Meera. With a love triangle in the first half, the story as usual shows Radha as Krishna’s first love while Meera is the modern age feminist sage whose life chronicles intense devotion to Krishna. However, the story takes a sudden but surprising turn after interval and an emotional but gripping content towards the end adds to the beauty of the film. Yes, in this modern love saga, Radha on her death bed asks Krishna to accept Meera after her. This is where the film takes a bow as Meera for the first time gets equal status as Radha who sacrifices her life and her own wishes in the service of Krishna.

Due credit can be given to the story writer (S P Jethlia who is also the Producer) for writing a story that is a bit hatke. For the first time, someone has added a new angle to the Krishna, Radha and Meera love story. Yes, instead of just being a Krishna ki deewani, Meera becomes his new bride and Krishna’s life.

The fresher’s have done a good job especially Sandesh Gour as Krishna who looks handsome, but not a stud. Suhani Jethlia as Radha looks beautiful as always but it’s Venus Jain as Meera who with her dreamy eyes will take your heart away. The Villain’s son Laksh played by Anuj Pareek has the looks and could have done a better job as an actor as he had the opportunity to steal the show right under. On the contrary, K Venkatesh was a total waste with actually nothing to do. The director could have done a wonderful job with him but failed. The music is pleasant to the ears and although the story is quite predictable, but on the whole, Meeradha is worth watching due to its gripping tale, positive message and the fresh talents.
Posted by Films & TV World at 11:30 PM