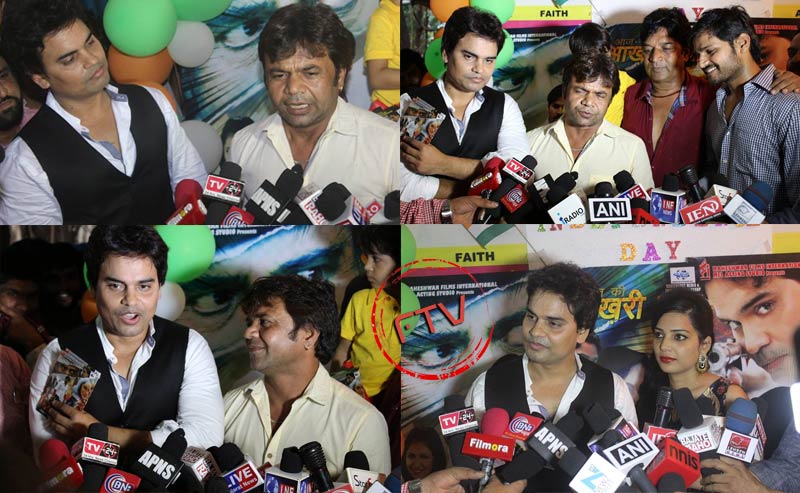 The song that was launched especially was “Rag Rag Mein Hindustan” a patriotic number from Today's Last Night created and curated by Samrat Das who is also debuting with this film. Speaking on the occasion Rajpal Yadav congratulated the team of Maheshwar Films International & MFI Film Institute Mumbai, and specially Manoj Maheshwar the moving force and the producer of the film. He also gave his heartfelt blessings and wished the film all success.

The music launch of the film was a grand affair with more than 1500 people attending the same. A beaming Manoj Maheshwar says, “I am immensely grateful to Rajpal Yadavji for accepting our invitation to launch our music of the film. We are immensely blessed to be honoured with his presence and his invaluable words cheering us of our creation. Such motivational and guiding words coming from an esteemed celebrity like him is an honour in itself for us. Rajpalji had always been an epitome of acting for me and his presence today made my day. I thank him from the bottom of my heart and someday wish to be working with him in near future.”

Adding on this occasion, Ritu Mann who is also co-producing the film and wife of Manoj Maheshwar says, “We are grateful to the almighty that we could very well manage the entire event and look after all the ease and comforts of our guests and with positive aura. We are also thankful to our MFI Team without whom this wouldn’t have been a huge success. I also want to thank the technical team of the film and majorly the director Mr. Sunny Kapoor and his team for the wonderful work. I wish them all success.”

Today’s Last Night is based on the basic premise of Indians v/s Terrorism. Yet it’s very different from the films we have seen so far says the producer and actor Manoj Maheshwar. “Terrorism has no religion. The film depicts how young boys are getting caught in the mesh and there is rampant conversion to turn them as terrorists. The film also carries a positive message that even without any weapon, through the marg of ahimsa, we can still change the negative mind of a terrorist with love and humanity.”

Concluding on a positive note he is sincerely thankful to his Parents “Who brought me in this world to see and feel all the miracles and changes of life. And also I am very much thankful to God to give me the most beautiful thing in my life, my life partner Ritu Mann who supported me in all way. And last but not the least – all those who have supported the film in some or the other ways.”

Films & TV World is an online partner to the film.