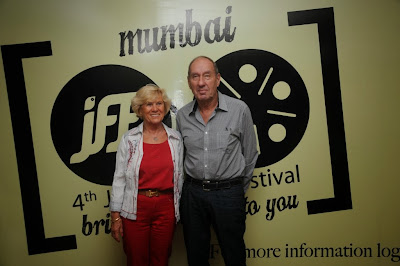 It was amazing to see the enthusiasm and anticipation of ardent cinephiles, which filled the air on the 5th day of the Jagran Film Festival, Mumbai 2013, held at Fun Republic, Andheri West. On 28th September, the festival entered into its 5th day of celebrating cinema, after winning hearts and entertaining thousands of cine lovers for four consecutive days. Like the other days, the 5th day of this six-day long cinematic extravaganza also began with the screening of a classic – Mother India, the Oscar nominated 172-minute Hindi film made by the famous director Mehboob Khan. This heart touching story of a mother, who killed her own son to save a girl’s respect won the heart of everyone present at the screening. It was a treat for cinephiles to watch this yesteryear’s classic on the big screen. Other classics showcased on the day were Rituparno Ghosh’s Chokher Bali, made in Bengali; Bimal Roy directed 142-minute Hindi classic Do Beegha Zameen; and one of the top 10 highly recommended films at the festival Evdeki Yabancilar, which means ‘Strangers in the House’.

Directed by Ulas Gunes Kacargil and Dilek Keser, this Greek-Turkish film of 2013 revolved around a house that can not be shared and became a silent witness of the intersecting lives of an old Greek woman and a young Turkish man. This 90-minute film dealt with the stubbornness of Agapi, the woman in his 80s accompanied by her granddaughter Elpida, and Yasar, a man in his 30s. Fighting over the ownership of the house, they were forced to share it together which gave rise to a series of changes in their lives. It was indeed one of the best films showcased at the festival.


Under the World Panorama section, the first film screened on the 5th day of the festival was Dervis Zaim directed 75-minute Turkish docudrama Devir (The Cycle). Films that followed were Salim Khassa’s 109-minute English film Desperate Endeavors, Esteban Larrain’s 99-minute Spanish film The Passion of Michelangelo, and another one of the top 10 highly recommended films - A Night Too Young, directed by Olmo Omerzu. This Czech film of 2012 was a story of two boys who met their school teacher Katerina and her friends David and Stepan on the New Year’s Day. Turn of events made them all spent the night at Katerina’s flat. As the night fells, a series of adventures provide these two boys, who were barely more than children, a glimpse of the adult world. In this 65 minute film, the boys made the adults face the truth behind their power games, seductions and yearnings, which at times could be more confusing and dangerous than other life-threatening habits. The next morning they all, grown at least one night older, left to their separate ways.
Posted by Films & TV World at 9:12 PM