The Grandmasters strike back this September! Catch the greatest Kung Fu legends come together on MOVIES NOW

MOVIES NOW gets stronger, bolder and extremely lethal with the Grandmasters this September. Be it Bruce Lee, Jackie Chan, Jet Li or Donnie Yen, they have thrilled you, captivated your imagination and proved that no matter the odds, good always triumphs over evil. And now the masters of the art form will fight faster and harder like never before! Get ready as the channel packs a fist full of action all through the month!

Starting 7th September, every Friday at 11pm, the Grandmasters face and combat their biggest challenges till date in Enter the Dragon, Hero, Ip Man 2 & The Legend of the Drunken Master.

The movie fest starts with Enter the Dragon, the most successful merging of both Hong Kong and American cinema in the martial arts film genre. This film was designed keeping in mind Bruce Lee’s vision of the Chinese culture in addition to the action packed blockbuster meant to entertain. Don’t miss the final film performance of the martial arts legend. 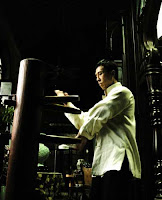 Hero, based on the story of Jing Ke's assassination attempt on the King of Qin in 227 BC, this blockbuster was the most expensive project of its time. Catch Jet Li, in the highest grossing film in Chinese film history as he battles three assassins.

Martial Arts fans get a chance to pay homage to the legendary Ip Man. Ip Man 2 is inspired by the teachings of this grandmaster of the martial art, Wing Chun. The film focuses on Ip Man’s migration to Hong Kong as tries to spread the discipline of Wing Chun martial arts. Don’t miss Donnie Yen in one of his best performances till date.

The legend of the Drunken Master is by far Jackie Chan’s most iconic Kung Fu movie. With innovative stunts, hard hitting punches and kicks, this movie raised the bar for the shaolin genre.


So get ready for some deadly action as The Grandmasters pull no punches only on MOVIES NOW!
Posted by Films & TV World at 8:49 PM