Days are Bright and Sunny now with Leone inside! 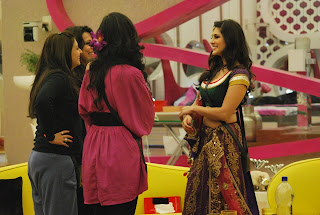 Day 49 & 50: On the day of nominations, we see Vida bid adieu to the Bigg Boss house. After the evictions we see Sky, Juhi, Pooja Bedi and Sidharth having a casual chat when Amar enters and Sky tells Amar that the way Vida had been behaving throughout the show with Amar it depicted Amar in a negative light and showed that he is characterless. Both the men enter into an argument when Mahek comes and pulls Amar away and asks him not to stoop down to Sky’s level and have an unnecessary argument with Sky. Juhi comments on this act of Mahek saying she is the one who is seen fighting and pouncing in the house half the times and she acting like a peace-maker now looks just so contradictory.
In the evening we see beautiful Sunny entering the Bigg Boss house in a grand manner. She is seen dancing on a Bollywood number and is wearing a fine traditional Indian outfit. The housemates are extremely excited as they think she is their ‘New Vida’ and think her to be the perfect replacement for Vida. Sky does not miss his chance of luring Sunny to be a part of his room, when the entire house was still just trying to know her well. The housemates are seen quite happy with their new fellow contestant and are seen bonding with her really well. As the next day begins, Amar is seen explaining to Sunny her duty of keeping the house clean being a part of Bigg Boss. 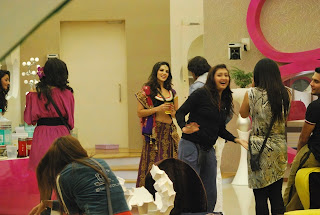 Early in the morning as the day begins, Sky and Shonali have a huge argument.  Sky thinks that Shonali is upset with him as he had nominated her the previous week for evictions where as Shonali says that she has forgotten it all long back. Sky is generally irritated with Shonali and has been behaving upset ever since the ‘Rajneeti’ task ended. Sky does not leave a chance to mock at her and calls her dumb and keeps repeating that she has an image of changing her rooms and forgetting all the wrong that she has done in the past. Sunny tries interfering and stopping the two, but nothing works. Sky goes on to tell Shonali that she is doing nothing but aping Mahek. Shonali could not listen to all that Sky was saying about her and broke down. Amar, Mahek and Sidharth manage to console her and calm her down.
As the day progresses, we see Sunny getting used to the Bigg Boss house and its contestants. Sunny has spent most of her time talking and understanding things from Sidharth and hence feels comfortable with him. Sidharth is seen teaching her Hindi and also shares with her the cultural values of India and talks to her about the heritage of India. The nominations then take place and we then see Juhi, Pooja Bedi, Sky and Sidharth talking to Sunny and explaining the eviction nominations procedure to her. The four of them also tell her that they really like her and like her company too. 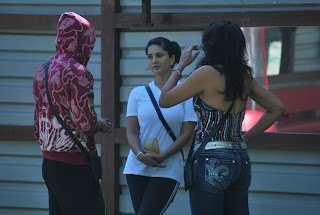 As the day ends, we see Sidharth chatting with Pooja Misrra and Sunny and telling them how he does not like anything going wrong around him. While Sidharth is seen saying this outside, Sky bitches to Pooja Bedi and Juhi telling them that Sidharth has changed all of a sudden. When Juhi tells him that it’s all because of the game, Sky says that it is not because of the game, but it is generally how Sidharth. He also tells them how Sidharth had made a plan against Juhi and Pooja Bedi  and Sky was the one who stopped him and told him he does not want to listen to any of it.
To find out, don’t miss Vodafone presents Bigg Boss 5 every Monday-Friday at 10.30pm and Saturday-Sunday at 10.00pm, only on COLORS
Posted by Films & TV World at 10:59 PM