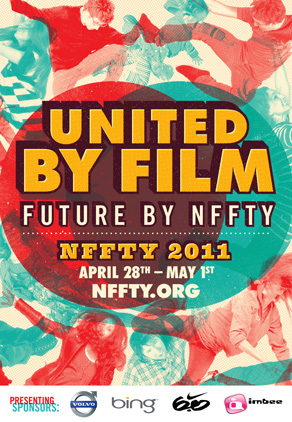 The largest youth film festival in the world, the National Film Festival for Talented Youth (NFFTY), is now accepting entries for NFFTY 2012 taking place April 26 through April 29, 2012 in Seattle, WA. Over the past five years, nearly 2,000 filmmakers aged 22 and under have submitted films. This year, it’s expected that more than 1,000 young directors from 40 U.S. states and 20 countries will enter their films into the festival.
“NFFTY puts you and your work in front of hundreds of other youth filmmakers, film fans, and industry insiders. The relationships and connections I’ve made are invaluable,” comments 19-year-old NYU student/filmmaker, and 2010 and 2011 NFFTY Audience Award winner Dom Fera.
NFFTY Executive Director Jesse Harris founded the organization to provide a venue for young people to show their films. Now in its sixth successful year, the number of entries has grown exponentially. NFFTY Managing Director, Lindsey Johnsons comments, “It’s extremely exciting for us, because the filmmakers who submit films to the festival are really the voice of their generation. Through their work they capture and provide a voice to issues that are important to today’s youth. We are lucky to be able to see the world through the eyes of tomorrow’s top directors!”
National Film Festival for Talented Youth (NFFTY) is the largest and most influential film festival in the world for young filmmakers (age 22 and under). NFFTY occurs each spring in Seattle, Washington and includes over 200 film screenings, filmmaking panels, film contests, parties, and opportunities for young filmmakers to network with industry professionals and each other. Young filmmakers from around the world submit feature-length and short films in narrative, documentary, animation, music video, experimental, and action sport categories. More than 10,000 film fans are expected at the 2012 NFFTY. Presenting sponsors for the 2012 festival include Volvo Cars of North America and Xbox Live.
NFFTY is accepting entries for the 2012 film festival until January 31, 2012. Entries can be submitted online to http://nffty.org/attend/submit.
For more information, contact: Leslie Cohan at lcohan@exclaimllc.com
For updates and news on the 2012 NFFTY go to www.facebook.com/nffty or log on to www.NFFTY.org
Posted by Films & TV World at 1:37 PM