The World comes Home at the 17th edition of Kolkata Film Festival!

The journey for the second oldest film festival in India that began in 1995 when the first independent international film festival was inaugurated at Nandan, Kolkata turned 17 this year. Naturally the fare  this time is not only varied but myriad as well with 150 films to be screened across 11 venues across the city and a rough estimate of 2600 delegates. Distinguished international and national guests.  A meaningful interface with the industry at the Film Market. A gala opening ceremony and a grand finale. The 17th edition of Kolkata Film Festival has finally come alive today at Netaji Indoor Stadium -  Kolkata, the city of joy, emotions and of cinema. 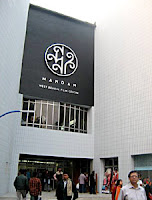 An accredited film festival of the FIAPF (International Federation of Film Producers Association, Paris), the Kolkata Film Festival has grown in stature over the years with multiple venues and ever increasing number of cinelovers. It is a festival of emotions where 150 movies of myriad shades will strum every cord of human emotions in their subtlest to the most dramatic fashion. They will touch lives of people around the globe in their truest social, political and emotional context throwing lights in the darkness of soul and beyond.
Recognized as a major film event in the country and abroad, the Kolkata Film Festival will once again showcase a host of quality movies from around the world in the presence of prominent guests and the cine enthusiasts. Ranging from a bouquet of tributes to old masters to a meaningful collection of contemporary world cinema, the KFF embodies the spirit of change and of plurality of thought and emotion , and harmonizes the old with the new, the traditional with the contemporary and the far with the near.
Posted by Films & TV World at 9:09 PM