A tale of 2 Pooja’s : Whos the Dirtiest, Naughtiest and the Bitchiest?

Day 43: A night before, Pooja Misrra is seen locked up inside the bathroom for almost close to 3 hours. This stuns the entire house, and Sky being the captain of the house takes up the responsibility of approaching Pooja Misrra and questioning her about the sudden lock up. Pooja Misrra in turn replies back in a very ghastly manner saying ‘Get lost’. That night, the entire house sleeps in a threat of Pooja Misrra being possessed. 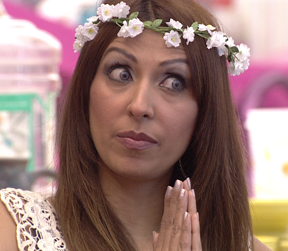 The next day starts with Pooja Bedi talking to Sky about Pooja Misrra. She tells him that Pooja Misrra is angry with him. Sky puts his ego aside and walks up to Pooja Misrra and tries to clarify their differences. A stubborn Pooja Misrra walks away and says that she is disinterested in talking to him. After sometime, Pooja Misrra is seen speaking about how people in the house are hypnotizing her and turning her innocent soul into a violent one to get everyone against her. She is also seen bitching about Sky to Pooja Bedi, where she tells her that he is instigating her to fight with Shraddha and Vida.
Pooja Misra explains the previous night’s act to Amar, saying she was only doing ‘pranayam’ in the loo and people are misunderstanding her and are scared of her as they feel she is practicing black magic. Siddharth steps up and tries to reason with Pooja Misra for her behavior but fails, so he tells her out of frustration that he would make sure that nobody in the house will talk to her.
The weekly nominations take place. Captain Sky’s special nomination turns out to be a surprise nomination for the entire house. Post the nominations the housemates are seen in a good mood and the non nominated contestants are seen bonding with each other and celebrating their victory of relief for the week. After a while, Siddharth goes to the smoking room where he finds Pooja Misra. He tries to get in to the room but Pooja Misrra slams the door really hard on his face. Siddharth loses his temper and runs in to the house to explain the violent behavior by Pooja Misrra. He warns all to stay away from him as he is going to get back at her. The two get into a very nasty fight, so much so that Siddharth almost kicks her. The housemates intervene and with great difficulty calm Siddharth down who is absolutely furious.

Post this violent outburst, Pooja Misra goes to her bed and starts meditating. Mahek sees her alone and comes in to show her support. Mahek who also doesn’t get along well with Pooja Misrra consoles her by saying that she can feel what she is going through right now and just wants to confirm that she will be there if she needs a person to talk to. After that, Vida informs the green room inhabitants that Pooja Misrra is changing her room. Everyone breathe with a sigh of relief. The day ends and all the housemates go to sleep but with restlessness and tension still mounting in many heads.
To be a part of the action, don’t miss Vodafone presents Bigg Boss 5 tonight at 10.30pm only on COLORS.
Posted by Films & TV World at 6:05 PM