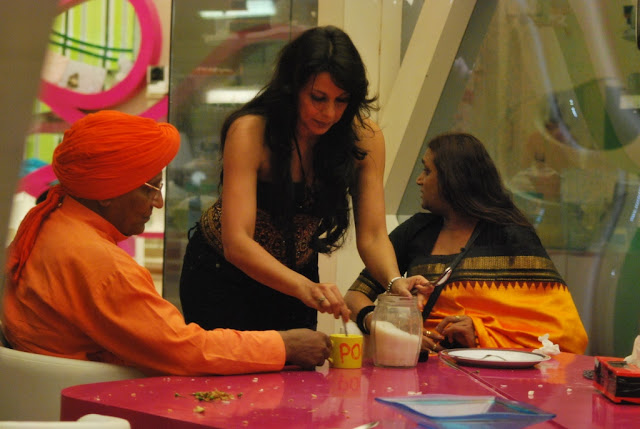 Day 38: The day stats with the housemates waking up with the routine wake up track. In sometime, Pooja Misra is seen painting her T- shirt with her ‘Kajal’ & lipstick. She is seen in a very funny looking avatar which gets all the housemates amused. She also explains the reason behind her foolish act. Amar and Vida are seen discussing Pooja Misra’s desperate measures to attract attention. 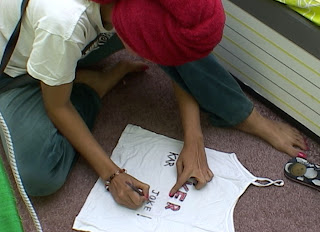 In a while, Bigg Boss calls Shraddha to the confession room and assigns her a secret task. Pooja Misra who was upset with the captain initially in the day, walks into her room and clears her difference with Shraddha. Shraddha makes an effort to patch up with her and explains that she has no hard feelings for anyone.
After sometime, the housemates finally experience yet another crazy fight. Pooja Misra of course is the culprit as she takes on Lakshmi as her latest target. The fight was over a negligible issue but Pooja made it a big deal and blew it out of proportion. The fight was amusing foe the rest of the housemates as this behavior was more or less a routine. Some peace is resolved as the housemates calm a furious Lakshmi down.
Post lunch, all the housemates are seen doing their own thing. Bigg Boss then calls Pooja Bedi to the confession room. To her astonishment she finds none other than Swami Agnivesh himself present in the confession room. After a shock, Bigg Boss convinces her that he is the latest entrant to the Bigg Boss house and it is her responsibility to take care of all his needs.
Then, Pooja Bedi takes Swami Agnivesh inside the house and introduces him to the rest of the housemates. Most of the housemates recognized him except the boys and a few girls. There is talk amongst the housemates about the random entry of Swami Agnivesh in the house. They come to a conclusion that Swami was sent to restore some peace, love & happiness in the house which was getting lost in thin air off late.  During dinner surprisingly the housemates were seen saying a small prayer to give grace to their food on Swami Agnivesh’s request. Well, one thing is for sure, Swami Agnivesh is definitely paying more than a helping hand in having some harmony in the house.
To be a part of the action, don’t miss Vodafone presents Bigg Boss 5 at 10.30pm, only on COLORS
Posted by Films & TV World at 8:36 PM