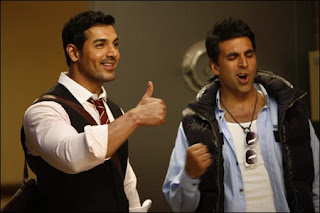 As seven fantastic weeks in the Big Boss house come to an end, it’s now time to celebrate the completion of 50% of the housemates’ journey in a grand yet ‘Desi’ style. To set the mood, Desi Boyz Akshay Kumar and John Abraham will join super-cool hosts Salman Khan and Sanjay Dutt to promote their upcoming movie on the Aapka Farman sets.
Promising to bring their charm and charisma, Bollywood’s hottest boyz will be seen joining hands with the hot combination of co-hosts and heartthrobs, Salman Khan and Sanjay Dutt, to bring some fun and masti to the Bigg Boss sets! With the four hotties being seen together on stage for the first time ever, the temperature on the Aapka Farman set is definitely going to skyrocket. While the shoot promises to be a sight for sore eyes, audiences will also bear witness to this deadly combination that will set heartbeats soaring. Which of the nominated ladies will be the lucky one to meet Bollywood’s hunkiest stars?
To find out, don’t miss Vodafone presents Bigg Boss 5 on Saturday, November 19 at 10.00pm, only on COLORS
Posted by Films & TV World at 4:34 PM