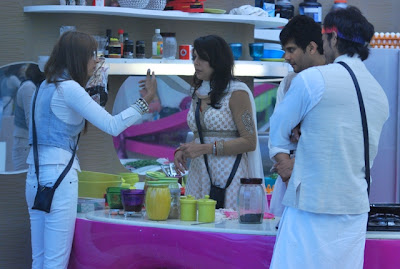 Day 45: The day starts with the routine wake up song and all the housemates are up and awake. Pooja Misrra is picked on by Sky and Siddharth especially for consuming too many eggs on a regular basis. Sky being the house captain tells Pooja Misrra that if she doesn’t stop this bad habit then he would send her to jail.
An angry Pooja Misrra retaliates by announcing to the rest of the housemates that she will be on ‘maun vrath’ the entire day in order to stop being everyone’s target. Vida approaches Amar and tells him that she wants to clarify a few things regarding her nomination. While the both get into an intense conversation, the bad boys aka Siddharth and Sky interfere and start instigating Amar against Vida. The duo has some success as Vida gets a little emotional. Post their departure Amar manages to convince Vida a little bit. 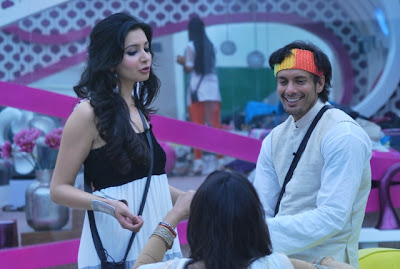 After sometime, Sky and Shonali are seen chilling in the captain’s room and discussing the happenings of the house. While both are at it, Pooja Misra storms into the captain’s room and barges into the restroom without his permission. An angry Sky comes out and tells the rest of the housemates that going into the captain’s restroom without prior permission is against the Bigg Boss house rules. So he walks back into his room, enters the restroom and forcefully gets her out and tells her that her behavior is just not accepted. An angry Pooja Misrra walks out and complains to Amar that her elbow was hurt when Sky forcefully opened the door on her.
Amar intervenes and tells her that she needs to take the captain’s permission for using his loo. Pooja creates a big scene as usual and shouts out saying that she will make everyone suffer for this brutal behavior against her. An agitated Sky being the captain sends her to jail as a punishment for her obnoxious behavior. In a bit, Bigg Boss calls the phone assigned in the house for the ‘Rajneeti’ task. Coincidently Sky receives the phone call and figures that he needs to send one of his party members to the other party. 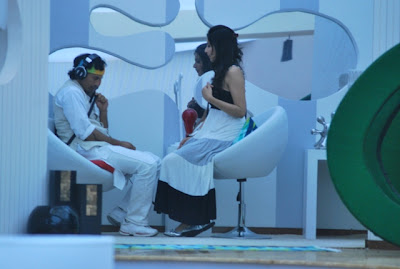 In sometime, Pooja Misrra is released from the jail. The daily task is introduced in the house and all the housemates get excited to perform the task. Post the task, Siddharth and Mahek get into a very ugly fight. Mahek instigates Siddharth by saying a few nasty things about his family and that gets Siddharth extremely angry. The housemates intervene and calm things down. The day comes to an end as Sky and Pooja Bedi hug and make up with Pooja Misrra. The diplomatic duo seems to keep everyone in their control.
To find out, don’t miss Vodafone presents Bigg Boss 5, every Monday-Friday at 10.30pm and Saturday-Sunday at 10.00pm, only on COLORS
Posted by Films & TV World at 8:38 AM