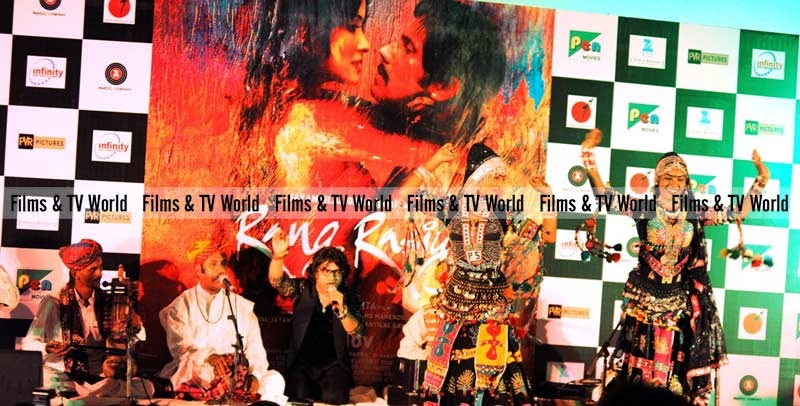 Randeep Hooda and Nandana Sen’s upcoming film ‘Rang Rasiya’ launched its music and trailer in an upscale event recently at the Matterden Center for Films and Creation, Mumbai. Singers Sunidhi Chauhan, Kailash Kher, Roopkumar Rathod and Sonu Nigam brought the night to life with their soulful voices as Randeep Hooda, Triptha Parashar, Feryna Wazheir and Rachna Shah cheered them on.

Randeep Hooda pepped up the atmosphere with wisecracks that had the audience in splits. He referred to Raja Ravi Varma as India’s first fashion designer, the ‘dada’ of cinema and a marketing genius. Randeep said, “I have a Raja Ravi Varma in me, but I am not Raja Ravi Varma.” Speaking about the film, director Ketan Mehta said, “Filmmaking is said to be a labour of love, and I’ve been pregnant for five years!” He expressed his belief that the system of censorship is outdated. Censorship is one of the reasons that the film’s release has been delayed by almost five years, as the makers were repeatedly asked to change scenes. He even revealed that it took six years to make the film in a way that it was cleared by the revised Censor board without changes.

The night started with the first exclusive glimpse at the trailer of the much awaited movie. An exclusive screening of the music video of ‘Anhad Naad’ in Kailash Kher’s magical voice followed the brief address by Randeep Hooda and Ketan Mehta. Sunidhi Chauhan then took the stage along with Sandesh Shandilya to deliver a beautiful rendition of the film’s title track, followed shortly by Sonu Nigam who took the audience’s breath away with his presentation of ‘Kamini’. Kailash Kher added the master’s touch to the night with a brilliant performance of ‘Anhad Naad’ with Rajasthani folk dancers and musicians accompanying him, which received an encore request that the singer heartily graced.

Later in the night, Randeep Hooda mindfully held up a poster of Nandana Sen who was unable to attend the event, as he posed for the shutterbugs with Feryna Wazheir, Triptha Parashar and Rachna Shah, much to the audience’s amusement. Jayantilal Gada of Pen movies revealed, “I had seen this film five years ago, but we weren’t into distribution at the time. I am really happy that we were able to be a part of ‘Rang Rasiya’. It is an amazing film with great potential.”

You can watch Anhad Naad here: