48 Hour Film Project comes to Mumbai for the 4th year.. 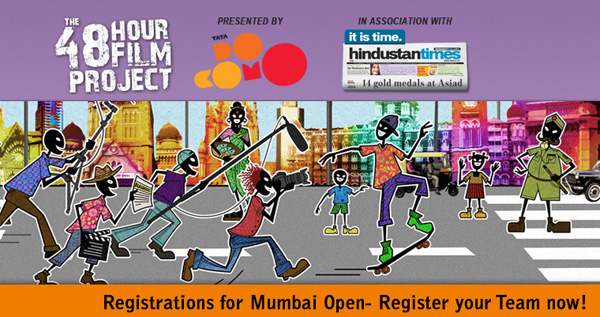 The 48 Hour Film Project comes to Mumbai for the 4th year on the weekend of November 4. Filmmakers from all over the country will compete to see who can make the best short film in only 48 hours. All the registered teams, represented by the team leader or another member meet on Fri. Nov. 4, at 6 pm at the venue (to be announced shortly). After the registration process, where we collect the signed Team Leader’s agreement from each team, we go into the official Kick Off proceedings.
We allot the teams their genres, through chits drawn out of a hat. With 2 minutes to go for the competition to start, we will announce the 3 elements which must be included in every film- a Prop, a Character and a Dialogue. At 7 pm, the teams set off to make their film. Teams have to make their own arrangements for equipment, editing and other resources.
48 hours later, teams start arriving with their fully finished films- scripted, shot, edited and scored- all in 2 days! 7 pm on Sunday is the deadline. With a half-hour buffer. Any team arriving after 7:30 pm is LATE. Even 7:31 pm on Sunday is late. And we’re very very strict about it. A late film will be accepted but will not be eligible for the competition. All films – on time and late – will be screened.
After the competition, the Premiere Screening & Awards will be held at Jai Hind College, Churchgate on 19 & 20 November, 2011 from 4pm onwards. However, this entails a registration fee of Rs.2500. The catch is that the winning film will go up against films from around the world and also win some exciting prizes. Enter today! Space is limited.

If you are wondering how to make a film in 48 hours, do not despair. For this you can as well enroll for a Hands-on Workshop on the Basics of Camera / Light / Sound. 48HFP and Accord Equips present a hands-on workshop on how to make a film in 48 hours. It is aimed at getting the Mumbai 48HFP Teams to optimise their shoot and make the Best of 48 Hours! The Workshop will be conducted by Radha Krishnan (RK) an established cinematographer and the following topics will be covered at the workshop.
·         Basics of using a Canon 5D with a demo
·         Live camera and lights setup
a) Basics of lighting
b) Lighting up a scene
·         Using different lenses
·         Managing a production flow & team work
·         Basics of sound capturing and sound design
·         Basics of colour correction
The workshop will be conducted on Sunday October 30, 2011 at Jai Hind College Auditorium, Near Churchgate Station from 4-8:30 pm
.
While the Workshop is FREE for 48HFP Teams/ Participants, others have to pay Rs. 700 for the workshop. Also, 48HFP participants who have queries regarding the competition can meet us at the Venue from 3pm onwards. We would be happy to answer all your queries regarding the competition.
Please fill the form below to confirm your Registration.
Posted by Films & TV World at 9:41 AM