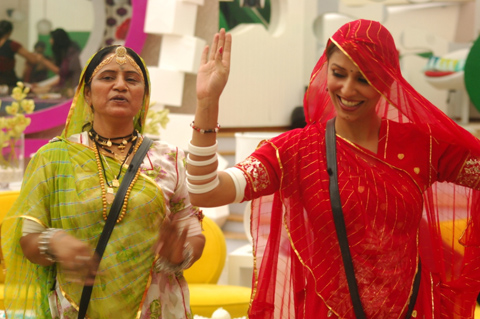 Day 9: The Bigg Boss 5 House is starting to get hot and it has nothing to do with the October-heat. While on the one hand, Pooja Missra continues to argue with her fellow contestants, on the other hand, Vida is engaging in some harmless flirting with the two men inside the house. During breakfast, Vida tells her fellow housemates that Amar and Shakti, being the only two men in the house, are like her boyfriends who look out for her and pay attention to her wellbeing.
While Mandeep and Pooja Bedi have always gotten along inside the house, for the first time there was an argument between the two. Pooja Bedi confronts Mandeep about encouraging Pooja Missra’s irrational behaviour and supporting her when her arguments and reasoning are invalid. This leads Mandeep to believe that Pooja Missra is fake – a statement that is authenticated by Shonali.
Nominations for week two are conducted and contestants head into the confession room one-by-one to reveal the names of the two people that they would like to see evicted from the house. New entrant Amar Upadhyay and captain Shakti Kapoor are exempt from eviction and just sit around and watch the drama unfold. Pooja Missra manages to pull relatively quiet, Juhi Parmar out of her quiet stupor and engage in an argument for using her washing wipes. While Juhi was quick to apologize, a cheeky Pooja Missra asks her to be careful and not use her stuff again so that the need to apologize wouldn’t arise. Juhi points out that apologizing is not a big deal. But Pooja Missra retorts that apologies mean something only when they mean something. Hearing this, Juhi is quick to reply that she always apologizes with her heart and the duo ignores each other thereafter.
Pooja Missra decides that maybe it’s time to turn a new leaf and she decides to bond with Gulabo Sapera. Missra bonded with Gulabo over the varied opinions that the duo have received from their fellow contestants. Taking her friendship with Gulabo to the next level, she decided to take some dance lessons from Rajasthani folk-dancer Gulabo. Dressed in traditional attire and wearing Rajasthani jewelry borrowed from Gulabo, Pooja Missra learned some moves from Gulabo while the latter sang along. Even after learning some moves, Pooja Missra and Gulabo were seen sitting by themselves and chatting up. Later in the day, Pooja Missra also makes peace with Lakshmi and the two are seen talking to each other nicely at many occasions.
A weekly task is handed out where contestants are given responsibilities based on CVs to manage the house. They are also given costumes that would help them live the characters of the role that they are playing inside the house.
To successfully complete her weekly task, Lakshmi is asked to wear trousers as a part of her costume, something that doesn’t sit well with her because her community shuns the usage of pants. A frantic Lakshmi breaks down and cries hysterically realizing that if orders are not followed, she might be asked to go to Jail. Juhi Parmar rushes to the confession room and asks for Bigg Boss’s permission so that Lakshmi does not break the rules of her community. Bigg Boss grants the permission and Juhi conveys this to Lakshmi, who then can’t stop singing praises for Bigg Boss.
To be a part of the action, don’t miss Vodafone presents Bigg Boss 5, tonight at 10.30pm only on COLORS.
Posted by Films & TV World at 11:04 AM