SRK and Kareena with Armaan land up at Inorbit Mall, Malad to launch RA One –The Game, only on PlayStation 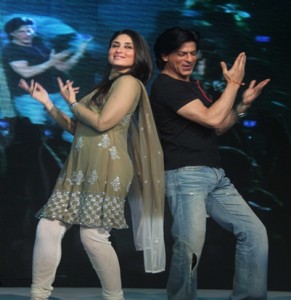 King of Bollywood, Shah Rukh Khan dazzled audiences once again, this time not for his acting abilities, but his gaming skills. In a PlayStation contest that was held across 30 stores in 7 cities; winners got a chance to fight it out with G.One (Shah Rukh Khan) himself in front of live audiences at Inorbit Mall.  The participants were asked to come up with a creative slogan and play one level of Sony PlayStation’s latest pioneering game based on the super-hero flick Ra.One – ‘Ra.One – The Game’. Exclusively developed for the PS2 and PS3, the game marks an important milestone in the Indian entertainment industry in being the first Bollywood title to appear as a full cycle game on any console platform.
In addition, the downloadable version of the game was released for the public and is now available on the PlayStation Network Indian store.  Consumers can now download the game for Rs.795/-. only . Shah Rukh Khan being one of the most popular actors; the game is expected to go beyond the Indian shores to millions of his and Sony PlayStation fans across the world. The game would also be soon available on a Blu Ray disc for the PS3 across retail outlets.
The game, which is now available in stores, has been well received by the Indian market. Taking players in-depth into the key characters of the film, Ra.One – The Game is loaded with intrinsic action moves together with striking graphical representations. The consumers, for the first time in the history of Indian cinema, have a chance to play the part of their favorite hero, Shah Rukh Khan in various action sequences from the movie in the game itself.   In terms of the storyline, it loosely connects to the movie storyline and introduces people to the main movie characters and the origin of their powers & characteristics. Conceptualized by Shah Rukh Khan himself the game has more than 20 levels, 4 game modes with various challenges & boss fights across various levels.
This event saw huge gathering as they eagerly awaited Shah Rukh Khan’s arrival.  Entertained with laser show based on the game and other performances, sneak promos of ‘Ra.One – The Game’ and free  PlayStation merchandise the public seemed to be getting into the festive Diwali mood.   The crowd went berserk as the performers led Superstar Shah Rukh Khan onto the stage followed by a laser show depicting the movie characters in Sony PlayStation’s ‘Ra One – The Game’. In association with radio partner, Red FM and venue partners, Inorbit Mall the event received great response and enthusiasm.
More public thronged to the venue and the decibel level skyrocketed the moment King Khan stepped on stage and started speaking about PlayStation’s ‘Ra.One – The Game’ and finally invited the winner of the game contest on stage.  G.ONE battled out with RA.ONE in the game to bring an end to evil; signifying the true meaning of Diwali.
The evening definitely was the one not to miss, with plenty of action, music and entertainment, enjoyed by one and all.
Posted by Films & TV World at 3:45 PM