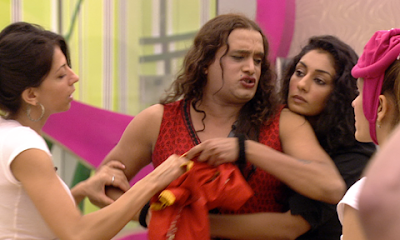 Day 18: On day 17, Amar had been assigned a secret task by Bigg Boss to convince his co-contestants that neither Shonali nor Pooja Bedi are the right choices for a probable captain for the upcoming week. As day 18 commences, Amar realizes that he has very little time to convince most of the people in the house about changing the nominations for the captain elections, Amar starts to panic. Later in the day, captain nominations are held and the new captain for the coming week is elected.
Prior to the elections, Lakshmi had promised Shonali that she would vote for her as the captain for the coming week, but Lakshmi changed her mind and chose to vote for Pooja Bedi instead. Once the elections were over, Shonali taunts Lakshmi and accuses her of being a betrayer because she broke her promise. An agitated Lakshmi loses her temper and lashes out at Shonali for being questioned about her vote. Lakshmi is furious as she claims to be neutral and justifies to all that she will stick her ground regardless of what the others might have to say about her actions. She made it clear that she doesn’t need to follow anybody’s instructions and is smart enough to decide what she wants to do. Mahek and Vida try to calm her down but she is too angry and continues to accuse Shonali for trying to be influential while being unfair and unreasonable.
Knowing that Amar doesn’t share a perfectly peaceful rapport with most of the members of the Bigg Boss 5 house, Sidharth decided to poison their ears about Amar and share some ‘outside’ world insights. Sidharth revealed to Shakti Kapoor and some other housemates the content of his interviews before he entered the Bigg Boss house. He also mentioned that Amar had decided to use the divide and rule strategy and made some derogatory comments about all the contestants before entering the house. This upset the other contestants in the house and worsened Amar’s image in their eyes.
To add to the fun quotient in the house, a pool party was organized for the housemates. The contestants were provided swimsuits, food and music and a party atmosphere is set up. All the contestants jump into the pool and have a gala time while forgetting all the ill-feelings they have been harboring for each other. Special bonding moments were evident between Amar-Mahek, Amar-Vida, Sidharth-Vida, Sidharth-Shonali, Shakti-Vida and Shakti-Shraddha while the rest of the people continued to mingle with each other and dance while shedding their inhibitions. All in all, a chilled out atmosphere is created which keeps the housemates happy and content.
To be a part of the action, don’t miss Vodafone presents Bigg Boss 5, tonight at 10.30pm only on COLORS
Posted by Films & TV World at 12:40 PM