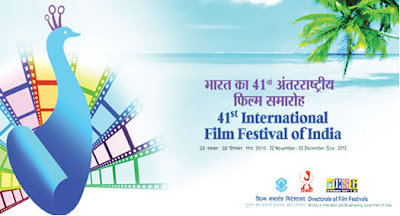 The memorandum of understanding (MoU) for the International Film Festival of India (IFFI) 2011 signed between the state and the Centre accorded GOA the status of a permanent venue for the film event in the MoU, informed the CEO of the Entertainment Society of Goa (ESG), Mr Manoj Srivastava. "Some of the co-ordination issues like bifurcation of work areas have been worked out," he added.
The inaugural ceremony of the 42nd edition of the IFFI will be held at the Ravindra Bhavan, Margao, while the closing event would be held at Kala Academy. The annual mega film festival will also undergo a paradigm shift, with uniformity brought in its theme.
Coming out with this information, the director of the newly established, Goa-based IFFI Secretariat, Mr Shankar Mohan said that the technical committee has already approved Margao as the venue for the opening of the IFFI 2011, and all related logistical modalities including transportation of delegates and traffic control are being worked to their last detail. The opening of the IFFI 2011 will be held in an auditorium with larger capacity," he said
“This prestigious film festival would be more global and people-friendly, receiving more public, including locals. IFFI 2012 will also have uniform theme in terms of its logo, design, colour, signature and literature such as catalogues, schedules and so on. Also the IFFI Secretariat will work fulltime in Goa from 2012," added Shankar Mohan.
"We are also reintroducing the public screenings, this year, replacing the beach screenings with open air screening of censored movies," the director of the IFFI Secretariat said, maintaining that move is on to bring in an eminent artist on Board as the creative advisor for handling look and feel of the cinematic extravaganza.

It has also been announced that a Short Film Centre will be very much a part of the mega film festival, and some Indian filmmakers whose short films were screened at the recent Cannes Film Festival, would be invited to showcase their films at IFFI 2011.
Posted by Films & TV World at 9:07 AM