Diwali Bonanza: Bigg Boss 5 housemates receives gifts in some form or the other 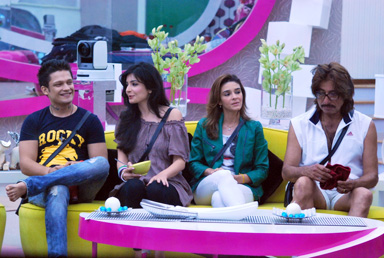 We all know that time just flies, but when occasions like the most celebrated festival of the country- Diwali is on the course, not many would complain. This season the Bigg Boss housemates will get a chance to celebrate the festival of lights with & without their families! Wondering how? Well most of the housemates’ families have sent some special gifts & messages for their loved ones. Though the housemates cannot spend any time with their dear ones, they will enjoy the benefit of getting the best of wishes from them. The housemates are going to be thrilled, excited & pleasantly surprised!
Shakti Kapoor’s family has sent him quite a few goodies in the form of clothes, Pooja Thali, & most importantly a letter. The letter was addressed by his wife & daughter with both stating how proud they were of him, as to what an inspirational leader he has been & how amazingly he has maintained safe distance from 13 other strange women! The lovely lady from Afghanistan aka Vida has received a photo frame & some chocolates. Although Vida doesn’t get along too well with her family, the Afghan beauty has received a very adorable picture of her with her mother. While Amar Upadhyay formerly known as the favorite beta of Indian television, seems to be on the verge of becoming the ladies man of Bigg Boss yet again, as he received a few personal gifts & 13 necklaces! Well the necklaces have been sent for all the pretty women in the house from his daughter. So let’s not get any ideas!
While most of the housemates have received gifts in some form or the other, the rest have not been so lucky! Will this create any rifts amongst the housemates? Or will all come together, join hands & celebrate the victory of good over evil?
To be a part of the action, don’t miss Vodafone presents Bigg Boss 5 tonight at 10.30pm, only on COLORS
Posted by Films & TV World at 11:51 PM