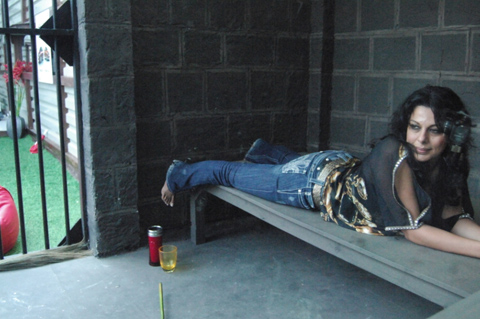 Day 7 and 8: While Nihita was bidding a tearful goodbye to her fellow contestants, Bigg Boss asked her to put one of the contestants in jail and she chose to put Pooja Bedi in jail because she nominated herself for the position. While Pooja thought it might be an easy-in-easy-out moment, she was forced to remain in jail till after midnight with no food. Pooja Missra took it upon her to instigate Pooja Bedi by not talking to her nicely and taunting her by singing songs instead of conveying messages. In a tit-for-tat move, Pooja Bedi ignored and avoided Pooja Missra after stepping out of jail to further miff the latter.
Safe contestant, Pooja Missra, faces a lot of flak inside the house for being safe despite of being disrespectful towards more or less everyone inside the house. She then picks a fight with Vida for calling her two-faced in front of Sanjay Dutt. Juhi Parmar also gets upset with Pooja Missra’s behaviour. 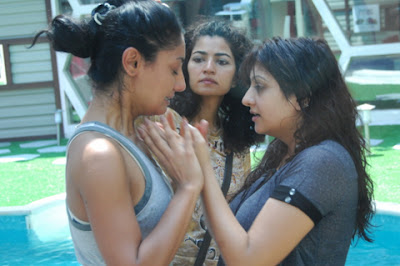 The next day starts with the entry of a new contestant, Amar Upadhyay. He’s immediately accepted by the group since not only is he a new face but also because he brought them news from the outside world. He immediately bonded with Lakshmi as he supported her decision to enter the Bigg Boss 5 House. He also gave her the strength to fight with the people inside the house who mistreat her and her community. Amar also bonded with Vida and the two engaged in some harmless flirting.
During the course of the day, Pooja Missra continues to pick fights with the contestants, especially Gulabo and Mahek. Pooja Missra tells Mahek that she is successful in life only based on what is going on in her private life and that is what has brought her to Bigg Boss as well. Amar also informs Mahek about what is going on outside the house. Shocked by the combination of negative things being said about her, the super-strong Mahek breaks down and cries hysterically. Fellow contestant Juhi Parmar consoles her and helps boost Mahek’s morale. Lakshmi, getting sick of Pooja Missra’s behavious towards the fellow contestants gives her a telling off.
As the day progresses, Shakti and Sonika are called into the confession room. Due to the emotional rollercoaster ride and recent war of words between Pooja Misrra and the rest of housemates, Bigg Boss offered Sonika the opportunity to leave the house on humanitarian grounds so that she could have a happy and peaceful pregnancy. An excited Sonika was overjoyed at being given this prospect. She joyously announced to her fellow contestants that she was going home to live peacefully with her husband and family. Her fellow contestants, however, were shocked at the news and sent her home with a tearful farewell and good wishes.
While closing the day, Vida, Mahek and Lakshmi pull Amar’s leg about the sleeping arrangements in the house. They recommend to Amar that he share the bed with Lakshmi now that there was more room in the house following Sonika’s exit.
To be a part of the action, don’t miss Vodafone presents Bigg Boss 5 tonight at 10.30pm only on COLORS
Posted by Films & TV World at 9:13 PM