Unprecedented numbers of audiences turned up for the screening of ‘Urumi’ amongst others...

The third day of 13th Mumbai Film Festival continued with fervor.  Following the two power packed days, the third day saw the opening of the 4th Rendezvous with French Cinema, with ‘The Artist’ (competed at the Cannes Film Festival 2011) as the opening film. Unprecedented numbers of audiences were witnessed for the two screenings of the film, following which a third screening of the film was also announced for today. Films that attracted most audience included ‘The Artist’, ‘She Monkey’s’, ‘The Whistle Blower’, ‘Generation P’, ‘Michael’ and ‘Urumi’ amongst others. 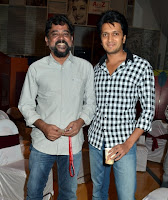 Also, under the aegis of the Mumbai Film Festival, the three day long Mumbai Film Mart (MFM), which is being held from 15th- 17th October kick started today. The press conference held to announce the same saw Stephan Holl, Managing Director of Rapid Eye from Germany, David Jourdan, Sr Vice President of IM Global from USA, Akifumi Sugihara, Director of Nikkatsu from Corp Japan, Eugene Kim of Showbox and BJ Park President of Apex Entertainment from South Korea on the panel along with Sanjeev Lamba, CEO Reliance Entertainment discuss how film festivals should not only be a platform for film showcasing, but also felicitate opportunities for global business. These and many more leading film companies from non- traditional markets have been scheduled to meet representatives from companies such as Reliance Entertainment, Yashraj Films, Eros, UTV, Balaji, PVR Pictures, Cinemax, Shemaroo and Cinergy amongst many others in the coming days, to explore distribution opportunities for forthcoming Indian movies as well as catalog movies. 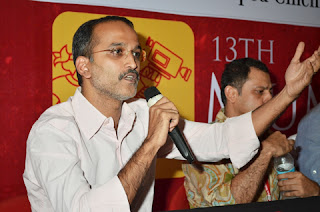 Riteish Deshmukh who was present to attend the screening of Santosh Sivan's 'Urumi' said, “I’ve observed that Mumbai Film Festival has been growing every year. It’s a good opportunity to watch different types of movies under one roof with the people who have a great sense of world cinema.” Commenting on Marathi movies participation in Mumbai Film festival he said, “These days the content of Marathi movies is very powerful and it should reach to Hindi film audience as well”.
Commenting on the wide range of films being shown at the festival Yash Chopra said, “The audience at this festival has variety of movies to watch. There is something for everyone here and response has always been very encouraging making this festival bigger and better every year.” 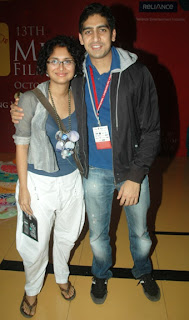 Shyam Benegal added, “As soon as I entered the main entrance gate for the Mumbai Film Festiva this afternoon, I was pleased to see huge number of movie enthusiasts attending the festival. We have a set of crème world class cinema for all kind of audience. While it’s not difficult to show the different kind of movies, it is difficult to find the attendance for such movies, but the response at Mumbai Film Festival is extremely high and positive.”
The open forum discussion for the day saw Rohan Sippy, Sameer Hoon President - VFX, Prana Studios, Naresh Malik- COO Reliance Media Works, Amit Roy and Sarak Mckenzie discuss how digital tools have helped cinema. Sharing his experience of shooting and releasing movies digitally Rohansaid “Digital brings advancement as compared to the older cinemas. Films always come with new challenges it totally depends how creatively an efficiently you use. Films can also be shot in different formats and it basically depends upon the budget.”
The day’s festivities ended with a cocktail evening hosted by the French Embassy in India and Unifrance, which saw the likes of Ramesh Sippy, Shyam Benegal, Anurag Kashyap, Pitobash, Kalki Koechlin, Vikramaditya Motwane, Onir, Mr Jean Raphael Peytregnet, Consul General of France, French directors Martin Provost, Nassim Amaouche, sisters Delphine and Muriel Coulin amongst others in attendance.
With large numbers attending the film festival, the fact that the Mumbai Film Festival is growing in popularity is only validated. With a glam-packed third day, one looks forward to day four.
Posted by Films & TV World at 2:40 AM